Brownies in the Closet


My mommy came to visit me on Wednesday! We had an awesome time laughing and making fun and catching up and being piles. (Pile: the act of laying around, usually in some sort of stretchy/unattractive/unfitforpublic ensemble.)  We got pedicures first, a staple in our repertoire of activities, but we had never been anywhere in Lincoln.  The salon where we ended up looked good but turned out to be a little bit of a production - it was too busy for the three workers there, so they kept telling people to come back in half an hour.  The problem was, they'd forget that they had customers returning in 30 minutes so they would randomly let other walk-ins sit down and essentially take their place.  It was awkward when those people came back and had to wait even longer...yikes.  The other issue was the ladies would switch back and forth between us (who came in first) and these other women who they didn't really have time for, so we ended up with pruny feet that had been sitting in the spa too long.  (You know those fabulous massage chairs they normally have at nail places? Ours must have been the model for people with sore bums because 90% of the massage was focused in the seat, compressing our cheeks, kneading, rolling, filling up with air and then awkwardly letting it out, making a noise that sounded distinctly like flatulation.  We couldn't really deal with it.)  Also, my mom had probably the worst salon attendant in the world, cutting her cuticles and scorching her legs with too-hot towels.  We left with pretty, happy toes, but needless to say we will not be back! 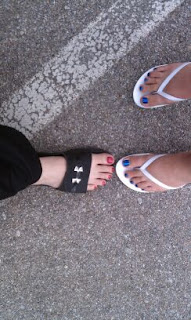 We ate our buns off at Macaroni Grill, going through (no joke) FOUR loaves of the buttery, salty sage bread and hoarding the pepper grinder and balsamic vinegar dispenser on our table.  Our waiter tried to take it away and put it back on the community cart but when we stole it again when he wasn't looking, he let it go.  Barnes and Noble was right next door so we perused for a while, finding my mom a fun new book which I will steal as soon as she is done reading it (I think it's called something like The Unexpected Guests?) and spending the majority of our time in the children's section.  For Father's Day Austin wanted the collected works of Roald Dahl, and when I saw them looking so juicy (Juicy: an adjective refering to something very neat or satisfying or organized, like a fun new office supply or a bag with lots of pockets.) lined up on the shelf I had to buy them right then and surprise him early.
Reading is one of Austin's most favorite things in the world, probably second only to me and sports. I bought him a bookshelf for Christmas solely for the purpose of his Star Wars collection. He owns 128 books...128 ALL ABOUT STAR WARS. But he loves them and was so happy to have them in our home.
Anyway, Mom and I had a great time and finished out by reading a little and then watching Confessions of a Shopaholic, which we decided was a movie of "almosts" - almost really cute, almost great story line, almost enough funny moments - but we had to fast forward through the awkward or depressing or sappy moments.  Prrrrrobably don't need to watch it again haha.  Thanks for coming, Mom!

Two random stories to end:
#1 - I really really like fruit leather, and Trader Joe's has a great brand.  The other day we were there and they only had them for individual sale, no boxes.  I wasn't about to load up on single-servings when I'm a triple-serving girl at this point, so I asked a worker to see if there were any boxes in the back.  She told me there weren't but took my number and said she'd call when they got a new shipment in.  I sent Austin to go pick it up and he came back with this: 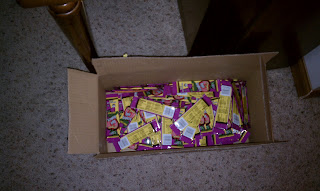 Apparently they thought I meant the industrial-sized shipping boxes and gave me one of these babies instead of the 12-pack I was expecting, ha!  I think there are 100 in there.  Austin said he was confused when the lady brought out this beauty but he was determined to follow my directions which were to "pick up the box of fruit leather." I guess we won't be needing to restock any time soon!

#2 - We wanted to support the young women in our ward (church congregation) with their camp fundrasier so we bought a couple of those pre-made jars with all the dry ingredients layered inside and cooking directions on the top.  One of the jars was for "Cowgirl Cookies" and they were deLICIOUS! and the other was "Emergency Brownies" which were a total flop.  They were dry and the batter wasn't even worthy of licking, so we tried to improve them by adding a top layer of oats.  Don't ask me why that was a good idea, because it was a terrible idea, and we didn't realize it until the damage was done.  To try to improve the situation we sprinkled water on the oats trying to make a sort of streusel - which of course did absolutely nothing - and then we poured melted butter on top to try to congeal everything together.  It was embarrassing, and then the brownies didn't even cook fully because they were smothered by this dippy oat topping. We didn't want to waste the brownies but they really were awful, so they were sitting on the counter for a few days with a knife stuck into the one corner we tried to eat.  We had people coming over one night and we were so ashamed of these sorry excuses for brownies that Austin put them in the utility closet to hide. 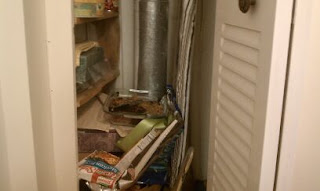 We forgot about them for a few days until I needed something from the closet, and I opened it to find this hahaha.  By then they were so hard I couldn't chisel them into the trashcan, so I soaked the whole almost-full pan in water and we are putting the incident behind us.  (I promise I'm not usually such a failure at baking - this was an exception!)

(Stay tuned for a delightful report on our experiences at Youth Conference this weekend - two and a half days of 14-17 year olds...you know you're dying to hear about it!)
Posted by Jessie and Austin at 10:18 PM