Only Real Men Do Yoga

All of my life, I have thought of myself as a skinny person. Every once in a while I get a little chubby around the edges, but it's never anything serious. I'm a pretty active person, and I can lose weight fairly easily. Unfortunately (and fortunately, I guess), Jessie is the greatest cook that this world has ever known, and I have had a really hard time saying no to second, third, and even fourth helpings. Needless to say, I put on quite a few extra pounds in the first few months that we were married. Then one day, my self-image was drastically altered: I was fat. Like I said, I have always thought of myself as a skinny person, so to realize that I wasn't anymore came as a rather unpleasant little (or, rather, big) surprise.


After a few days of moping around in my obesity, I finally realized that I could do something about it, so that night I went for a run. I went to the lake that is right behind our apartment, and I did the whole 2.3 mile revolution. Embarrassingly, it was really hard. I had to take a walking break every 2 minutes or so, and it took me a full 35 minutes to get all the way around. But I kept at it. I ran for the next 3 days consecutively, took a break on Sunday, and then ran Monday through Saturday of the next week. I didn't see any results in that short period of time, other than the fact that it was getting a lot easier to keep running, rather than taking a walking break every 10 feet.

A couple of months went by, and I kept running my butt off. Literally. Eventually 2.3 miles around the lake became too easy, so one time I went twice around the lake. That's 4.6 miles! I was so proud of myself. Then one Friday night I pumped myself up before bed, promising that I would wake up early the next morning and run for as long as I could. I ran for 50 minutes, and I later measured the distance to be just over 5 miles. The next week I ran 6 miles. My new plan is to keep increasing my mileage until I feel comfortable enough to run a half marathon. I'm planning on doing one in September in Grand Island.

So, earlier this week, Jessie was in Papillion house-sitting while her parents were out of town.  I literally had nothing to do. Luckily, I am a huge basketball fan, and the NBA finals were on. Since we don't have cable in our apartment, I usually go over to our apartment complex's workout room and run on the treadmill while I watch the games. I ended up doing 5 miles during the first half, lifting weights during half-time, and then I went 4 more miles during the second half. Yeah, I could barely move the next day. Anyway, to get to the point of this whole post, I wanted to do a nice recovery workout the day after my 9 mile mega run. Jessie recently bought a DVD workout program called X-train fitness, and one of the workouts is yoga. Thinking (naively) that yoga would make a good recovery workout, I popped the DVD in and got to work. Then, mostly to make Jessie laugh, I put on her pair of yoga pants, took a picture of myself, and sent it to her with the caption, "I figured if I was going to do yoga, I might as well do it right." 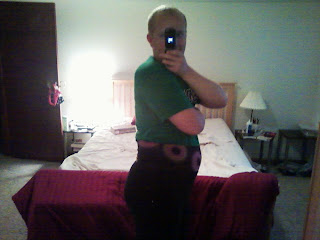 Anyway, yoga kicked my butt, and every muscle in my body was sore the next day. But at least I was dressed for the occasion :)
Posted by Jessie and Austin at 5:49 PM