"That kid has a MOLE on his head!"

Every summer our church puts on a program called Youth Conference that is exactly what it sounds like: a gathering of teenagers participating in meetings and projects and events for a few days with mass-produced food and far too few showers. From the moment you see the kids, you know which side they fall on: the I'm-here-because-Mom-made-me clan or the I-LOVE-CHURCH-AND-MEETING-NEW-PEOPLE-YAY! sector. There are no in-betweens.  I have to say, though, that our expectations (aka concerns) of this event were not always warranted - even though there were the inevitable productions and issues, the kids we met and worked with really impressed us and made our experience funny, sweet, and memorable.

Our first task as Group Leaders was to plan get-to-know-you activities and make a team poster.  When Austin heard this he said with anxiety, "Do we have to? I hate those kinds of activities."  Let's be real: everyone does.  So we started off by watching this video: Julian Smith - malk to get everyone laughing and show how we can enjoy the Internet and media without inappropriate references or bad language.  (We had to play the video from my phone since the church filter system blocked it on the computer - we are such heathens.) Then we had them make their own skit following these rules: use all the props (tennis ball, paper star cut-outs, nerf gun, donut holes), everyone has to participate, someone plays the part of a teacher, say "arise and shine forth" (the theme of the conference) twice, and someone has to die. We left the room while they plotted, and when we got back we were treated to a ten-second skit that met all the requirements.  Then we worked on the poster but tied their wrists together to spice things up, and still had time to spare.  We decided to do a rock, paper, scissors tournament, but changed it to "rod, prophet, scriptures" to make it more church-minded, haha.  (Rod is in reference to the Iron Rod, a symbol of holding strong to the end.)  One of the kids made a bracket on the chalkboard and we played best 3 out of 5 for each round.  Lea ended up winning (girls represent!) and then we went to a welcome meeting and a video discussion panel.

God Will Lift Us Up - this is one of the video clips that really touched me.  I realized I have NO idea what such a trial and sacrifice would be like - I mean she can't even eat, and she is still getting up every day and being positive and not complaining, not to mention helping others. This darling girl inspired me to have a better attitude and be grateful for everything in life, because I really do have so many blessings - my wonderful family, my health, a completely awesome and relaxed pregnancy, my knowledge of the Church of Jesus Christ of Latter-Day Saints, my cozy apartment, my opportunities with piano, etc etc.
Dayton's Legs - another inspiring video...tear-jerker!

We spent the bulk of the day in Omaha at the Winter Quarters Temple, visitor's center, and cemetary, where the kids did service, learned about the pioneers who stayed at this site when they couldn't make it all the way West during the winter, and watched a little video.  (The Temple is not where we have our normal worship services, and in order to enter you have to be interviewed by Priesthood authority and keep to a certain moral code, including modest dress, being chaste, using clean language, watching only uplifiting and appropriate media/entertainment, and staying away from drugs and alcohol.)  It was really really cool to see so many teenagers be able to meet these standards in a world that is increasingly scary and wicked - it made me less nervous for our future children because these young men and women will grow up and be their leaders, and I know they will be in good hands.

We came back to Lincoln for dinner and the all-important DANCE.  Now, if you've never been to a Mormon youth dance, you haven't experienced the peak of teenage love, awkwardness, and flat-out embarrassment.  Multiply what you know about school dances (minus the gross dancing and filthy music) by four and you might start to understand. Don't get me wrong: when I was 14, I looked forward to these dances like they were trips to Disneyworld, but now as a leader I found myself watching with part amusement/part horror, desperately hoping I wasn't as obvious in my ploys to dance with the cute guys and as blissfully unaware at how awful I really was at dancing.  I'm exaggerating of course, and the youth really did have a fun time, but I am very glad I am done with that stage of my life!

Then it was time for an evening devotional and bed at our host houses.  You never know how these things are going to turn out when you have to stay at a stranger's home, but we (the girls) TOTALLY lucked out and got an awesome family who supplied all four of us with beds, air conditioning, popcorn, and clean bathrooms.  Score!  Austin and the boys, on the other hand, weren't in quite such luxurious accomodations.

(Austin is going to briefly explain his sleeping situation)
At about 10:30 on Thursday night, we plugged the address of our host home into the GPS (lovingly nick-named Gypsy) and set off. Pretty soon we found ourselves in what can only be called the ghetto of Lincoln. Every house around us looked like a drug bust waiting to happen. After getting lost only once, we found the right address, and we knocked on the door. Our hosts quickly let us in, introduced themselves, and gave us a quick tour. The house was at least 800 years old, and the floor was in danger of caving in every step we took. The bathroom was one of the strangest things I have ever seen. The toilet was made of wood, and the bathroom sink was an old writing desk (complete with stool underneath, just in case you got tired while washing your hands) that had been poorly converted into a wash basin. Next, they showed us where we would be sleeping. It was a very large living room with two decent-sized couches and one love seat. I was fortunate enough to score the longest couch in the room.  A couple of the other boys, however, were not quite so lucky. One of them (the tallest one of the group) called the love seat, and I'm sure he now has scoliosis from the angle his spine was at while he slept. He didn't have the worst of it, though. Two of the boys had to sleep on the floor. I usually really like sleeping on the floor, and I totally would have volunteered to take the floor. Unfortunately for the boys, this ancient house had only hard-wood floors, and I wasn't about to spend two nights on hard-wood floors. No thank you. Anyways, that was our sleeping situation, and I'm still really jealous that the girls wound up with such a great hook-up.


When I saw Austin the next morning (at SIX AM...I don't know who had the fabulous idea of waking up a bunch of teenagers before the beeping SUN rises but they did it!) he looked distinctly unrested, even amongst the bleary-eyed and sluggish kids.  I asked if he had taken a shower to help wake up and he said, "well, I would have, but our host dad told us to 'wait 10-12 minutes to let the water get warm.'" TEN TO TWELVE MINUTES, folks! So that was a clear no.  Anyway, this day was all about service, and there were four different projects.  We got assigned to work at a park half an hour away, although I couldn't get the various Lincoln highways straight so it took us over an hour to arrive.  (For the record, Nebraska Highway is the same thing as Hwy 2; O Street turns into Hwy 34; and Cornhusker Highway is Hwy 6.  I still don't really know how we got there, but I only take 60% of the blame - these highways need to get a grip on their lives.)

So for seven hours we teamed up with another group and the 16 of us mulched.  All.  Day.  Long.  There was a huge mulch pile in one parking lot, and everyone would take turns taking wheelbarrows back and forth around the park, dumping  where others had just finished weeding and where still others waited with rakes at the ready.  We mulched what seems like a million trees and gardening islands, getting further and further away from the mulch pile.  Some of the youth found grubs and a couple of snakes burrowed in the pile, and sure enough Austin unknowingly wheelbarrowed a snake over to where I was raking. 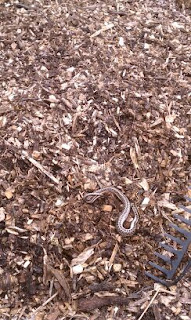 We even found a dead bird in the grass, directly in the path of our work, so I asked James to "deal with it."  He used a rake to fling the bird into the mulch, but the bird ended up going more vertical instead of horizontal, causing James and the onlookers to recoil quickly as the smell of rot wafted through the air.  He tried again, a little more gingerly, and then wiped his forehead and said, "That bird has had its last flight!"

Both groups were AWESOME and worked super hard (except for an unusal boy who laid in the grass with his hat over his face).  We got a ton of work done and even though we didn't (and will probably never) get any sort of thank-you, it felt good to be doing service and working together. 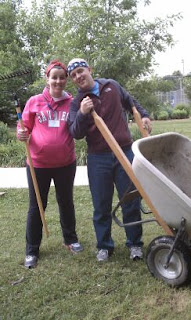 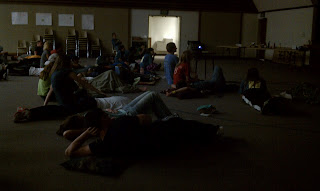 We came back to the church for some dinner and then watched Up in the gym with blankets and pillows.  Austin fell asleep, along with half of the room - it had been a tiring, long, hard-working day! We packed up and dragged ourselves back to our host houses and with sighs of relief hit the hay (whether "hay" was a delightfully comfy bed, an ancient couch, or the good ol' hardwood floor.)

Saturday morning consisted of breakfast and a final testimony meeting with the youth and some of the leaders talking about their experiences over the conference.  It was touching to listen to specific members of our group describe how they had grown in the past couple days and to think that we had made a difference.  It was a little less touching 90 minutes later when we were still sitting there, but the spirit was good and we were proud of our kids.  They went home with their parents and we went home for a NAP!

Some favorite quotes from our group:

Me: "Yeah, the songs at Girl's Camp are pretty annoying, but at least they stop as soon as camp is over."
James: "Yeah right! I hate Girl's Camp! My sister came home last year and taught all the songs to my younger sister, and they sang them all the freaking time!"

Leaders: "Don't forget to leave your weapons and phones at home!"
Lea: "Woops, I brought a knife."

James: "My older brother is amazing at football.  The team was really excited when they found out he had a brother.  Then I played for them...they asked my brother what was wrong with me."

Austin: "You're looking a little tired, Paul."
Paul: "Yeahh, I was getting ready for bed last night and then I found out my host family had Super Smash Bros. on N64...I stayed up all night."

Leaders: "Would you like turkey, ham, or vegetarian for your sandwich tomorrow?"
James: "Turkey.  But what if I want ham tomorrow?"
Tomorrow...
James: "I was right.  I did want ham."

Jake: "What are you going to wear to the dance...something silky?"

Lea, in the middle of dinner: "LOOK! That kid has a MOLE on his head!"
Posted by Jessie and Austin at 11:05 PM