First of all, this is what Peanut does when I'm at my parent's house:

Anyway, my 13-year-old sister is a fabulous swimmer and got to go to Lawrence, Kansas for a swim meet this weekend. We decided to make it a mini vacation and instead of just the normal Mom and Annie, my dad, Sam, and I tagged along too. Any Plumb trip, regardless of length or occasion, is guaranteed to involve inappropriate amounts of food, and this was no exception. We loaded up at a gas station for the 3-hour drive (passing around Dad's mustard pretzels and my Skor bar and praying that Sam wouldn't eat his Salsitas in the car) and upon arrival at our destination, dropped Annie off to warm up at the pool and immediately proceeded to find a suitable feeding place. The Salty Iguana caught my eye and I convinced everyone it was a good idea to try and experience the "local" and not chain restaurants...turns out I was totally right. Everyone LOVED their mexican meal, and we left full and content to go watch Annie.

Food was one theme of this trip, and another was HOT. It was just ridiculous how sweltering it was...with 105 degree temperatures and no cloud cover, we were literally dying. We would leave the sanctity of our air-conditioned car (which was on full blast pretty much the entire time) and within two seconds be drenched and panting and hating our lives. It was even worse when we got to the aquatic center because A) it was packed and we had to park in Egypt, leaving trails of sweat (and tears) where we trekked to the front doors and B) the pool inside makes the air drip with humidity and the temperature is unkind. Basically we were hot and sweaty for the duration, while Annie got to swim in the luxuriously inviting pool. It was VERY fun to watch her though - she is so awesome! Sam commented afterward that he doesn't know anyone louder than me, which is definitely true when my sister is killing it in the pool. I tend to get...overexcited...and yell a lot. (I don't know if you know me, but I am a premium cheerleader.) Anyway, Annie was great, and it was fun to have a little Plumb cheering section for her.

We checked into the hotel for a little R and R afterwards, but anyone who has been around my brother long enough knows that "rest" and "relaxation" only exist so he can ruin them. I was so relieved to put my swollen feet up and rest my aching back in bed, but the calm only lasted minutes before the storm...out of two beds, a big couch, and an office chair, Sam decided that he wanted (more like needed) to be precisely where I had staked my claim.


(One time we drove to Utah and Sam, Max and I were in the Honda with me driving, Sam in the front, and Max passed out in back. Max wanted a turn to drive so I decided to take a nap in the backseat after stopping at a gas station. When I came back to the car after getting a hot chocolate, Sam was waiting for me in the back seat, refusing to move and claiming that we needed to "bond." Memorable.)

Back to Lawrence...
It's a college town that hosts the University of Kansas and my twin brother's favorite (understatement) basketball team. All sorts of Jayhawk memorabilia and swag were displayed and Jack would have been in heaven. We walked down the "downtown" shopping area which was one street lined with cool shops and cute boutiques. After having such a good experience with the local Salty Iguana, my dad chose the dinner restaurant in hopes of keeping our positive record going. (Four for four great meals so far!) He found this cozy Italian place in this shopping area called Genovese where we were swept up a staircase into a big leathery booth and served sophisticated bread, hummus, and oils. We all had deLICIOUS dinners - my dad chose a winner! - and had to order dessert because we weren't ready to be done with the experience. Some creme brulee and chocolate torte later, we finally left in a stupor of savorousity. (9 for 9 meals!)


We got back to the hotel and this time Sam decided to "troll" Mom. I don't remember what they were grappling about, but that's a decorative bedsheet around Sam's neck. 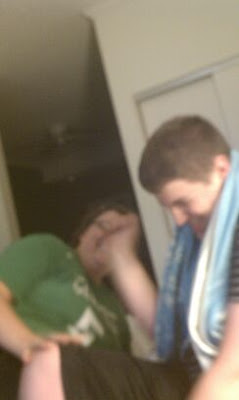 I was tired and punchy by this point, and it didn't help when Sam started to imitate the pictures teenage girls put up on Facebook. 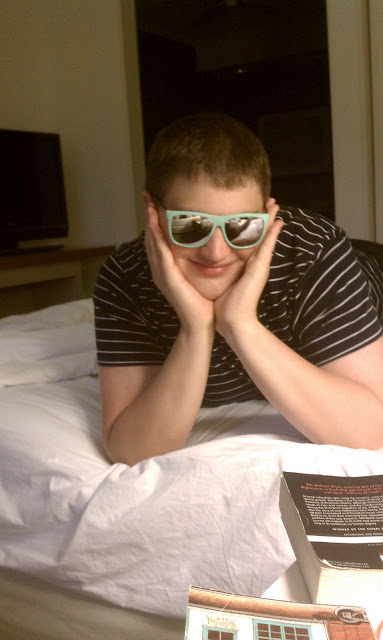 I had to put my blankie over my head because I couldn't calm down and was crying out of overstimulation and humor and exhaustion haha. It was very pathetic. (My mom kept trying to get a picture but I refused.) It was a silly night. Sam slept on this hilarious pull-out couch, my mom was freezing because she slept right by the AC, I was hot because I was on the other side of the room, Dad was snoring, and Annie stayed up later than the rest of us. It wasn't very restful, but we survived.

In the morning we had breakfy and Sam, Dad and I went for a little walk, sort of by the Kansas River. It was already too hot, even in the morning, so we went back to the hotel to partake of the AC and showers. Annie had time to kill before warmups so we went back downtown to continue perusing. Sam and I got frapps and the new Maroon 5 cd at Starbucks and then went to this AWESOME used bookstore called the Dusty Bookshelf.

﻿
﻿We had lost track of the rest of the fam so we continued on our way with me dragging Sam into baby stores and cute boutiques. When we ran into my mom eventually he gratefully made his escape to more appropriate stores for him haha. My sister got shorts, I got a fabulous diaper bag, and Dad picked us all up in time to drop Annie off again and then whisk off to lunch. The pressure was really on this time because the previous day's meals had been so stellar...luckily, Mom chose wisely and we had another great dining experience! She found this tavern around the corner that had something for everyone - I got a chipotle smoked turkey jalapeno cheddar wrap with onion rings, my dad got fish and chips, Sam got a bbq burger, and my mom got a golden pulled pork sandwich with fries. We ate every bite, and then had to get the brownie dessert too. Yummm! (13/13) 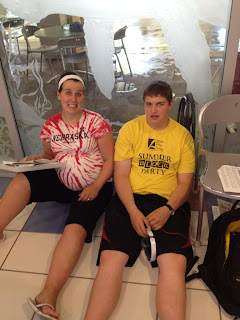 Then it was back to the pool to support Annie in her last three races - we had even more waiting around time the second day and amused ourselves with crosswords, music, and chatting. My back was bothering me so I sat on the floor for a minute...naturally, Sam "needed" to join me, wedging in between my mom's chair and me. Sigh : )

We cheered Annie on (she did even better this day!) but were very happy to get out of there when she was done...it was just too hot. We got some frozen yogurt and were too full for dinner, so we hopped in the car and headed home. We put in the Les Miserables concert DVD and enjoyed every minute, commenting about our favorite characters (and cheering when Fantine was finally out of the picture) and singing the most passionate parts. We Plumbs pride ourselves on our musical blood and would never be caught dead singing off-key, but once in a while (especially when we get bored) we will intentionally sing along to a song really flat and totally make eachother laugh. I think we owe some apologies to the cast of Les Mis for butchering some really lovely moments haha. We got home all safe and sound, and were all very glad we went on this little trip.

Meanwhile, Austin was in Des Moines for the baptism of one of the boys from his mission. He served Spanish-speaking for two years in Iowa and loved it almost as much as the people he served loved him. A family he was particularly close with asked if he would do the baptism for their son, and naturally he was honored and excited. Unfortunately, this Kansas trip was already in the works, so we had to part ways, but he had a great day eating all the authentic Mexican food he could ever want (including his very favorite, lengua: tongue!) and catching up with the families from his mission.

Now we are back together and enjoying a quiet Sunday afternoon.  Austin let me rest in bed this morning and decided to make breakfast, which was very sweet of him. He had made waffles before and is a good cook in general so I wasn't worried, but when he told me they were ready and I came out to see them on the table, I was concerned. 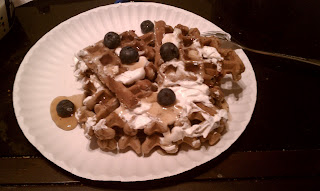 They were entirely BROWN and looked either burnt or made with unusual ingredients, neither of which were appetizing options to me. I wanted to support my cute husband so I didn't say a word and loaded up my plate with cool whip and blueberries, and dug right in. It wasn't terrible, but something was definitely amiss. After watching me eat a couple bites he grinned sheepishly and said, "Okay, are you ready for the secret ingredient?" I looked at him skeptically and he confessed, "So, we were out of milk, but I had already mixed all the other ingredients and I didn't want to waste. Then I saw your creamer in the fridge, soIusedthatinsteadofmilk." I laughed for a good long time - I like to put flavored coffee creamer in my hot chocolate (yes I realize it is 100 degrees outside but I love my HC) and this kind was chocolate raspberry, which was the reason the waffles were totally brown and a little dry. I wouldn't necessarily suggest this...recipe...but it was yummy as an experiment and I very much appreciated Austin's effort and enthusiasm!

And, to end with, we left church a little early today because I was SOOO swollen, mostly in my feet/ankles but also in the rest of my body, and it was uncomfortable and unattractive, to say the least. I definitely won't post (or take, for that matter) pictures but it was/is unpleasant.

That's your Peek at the Poulsens!
Posted by Jessie and Austin at 3:20 PM