True story: we went to a real, live hockey game today and barely lived to tell the tale.

Okay it's not quite that dramatic, but these people take it SO SERIOUSLY. We bought tickets for a friend's fundraiser thinking it would be a fun family outing and had no idea what we signed up for.We knew we were in way over our heads when we had to walk through a haze to get to our seats and cover Natalie with two blankets to make sure no beer was splashed on her. Strike three was when they blasted heavy metal music that made our seats shake...not exactly the "family" environment we had envisioned haha.  Here's a couple highlights from the forty minutes we were there: 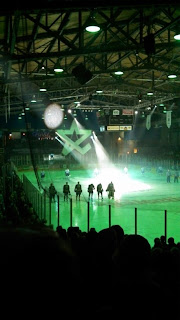 The opposing team came on and the crowd turned around, booing with their backs to the ice.  When the lackluster commentator read the names of their starters, the crowd chanted "who cares you suck." Creative. Then, our team (the Lincoln Stars) came whooshing out to strobe lights, fog, skulls on the ice (SKULLS, people), extreme announcing, and an enormous logo backdrop.

A grandma (I didn't realize hockey was popular with the oldies) sitting across from us was blowing a HORN. Furthest thing from a drill. 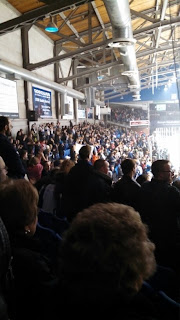 People against the back wall would turn around and bang their fists against the wall when they got riled up (which was pretty much the whole time)...I guess it's a thing you do at these sorts of events but it just made me nervous. 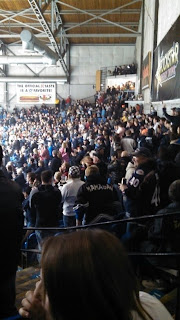 It's hockey so I guess fighting is part of the game, and the arena was straight up clamoring for a brawl. They cheered every time there was a sickening thud of a player being brutalized against the rink wall, and when there was an actual skirmish hard core music started playing. Apparently violence IS the answer in this case. 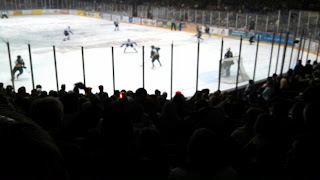 When we score, instead of being like "wooo go Stars!" this positive crowd has another uplifting cheer: "He shoots! He scores! Hey goalie! You suck!" I hope our children grow up to say these sorts of kind things.

It was actually a pretty fun environment and I could have gotten way into it, but I felt very uncomfortable having a pure, innocent little baby there. Natalie was a little overwhelmed by all the lights and people and noises.
﻿
It was a fun date for sure, if only for the entertainment value, but I think this family will stick to more low-key events for the kids! 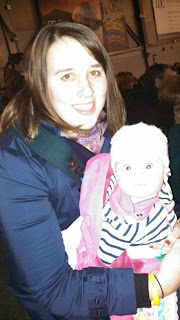 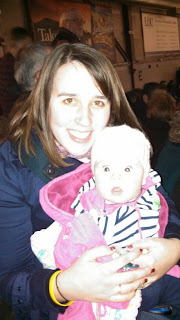 (Hockalie is bewildered by the arena and the flash!)
Posted by Jessie and Austin at 9:50 PM