The single greatest American tradition of all time is the yearly airing of 24 hours straight of A Christmas Story. Okay, so maybe that's a bit of a hyperbole, but it's awesome. Who wouldn't want to watch 24 hours of Red Ryder bee bee guns, a Santa Claus that makes kids cry, and leg lamps?

Anyways, traditions are great. Traditions have a way of turning holidays into memories. Holidays probably wouldn't even be fun without the traditions that have evolved around them!

My favorite Christmas tradition growing up was how we always went out for Chinese food on Christmas Eve. When we were really little, my parents would always request a table by the window so we could watch for Santa Claus flying in his sleigh over top of us. To this day, every time I taste sweet and sour sauce I feel distinctly Christmasy.

Something Jessie's family has established as a Christmas tradition is going to the movie theater on Christmas Day. I haven't had the opportunity to participate in that particular tradition yet, but I think we are going to see Les Mis this year.

Our new Christmas traditions include: 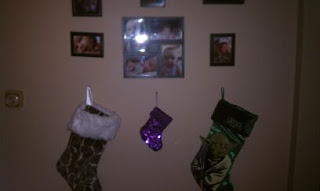 So the tradition that we are starting is this: when Natalie turns five years old, she will get to pick her own stocking, and her glam stocking will go to our next little girl. We also bought a little boy stocking (not pictured here), and our first boy will get to pick his own stocking when he turns five. And so on and so forth until we have an entire wall full of awesome, mismatched stockings. Be jealous.

Last year I surprised Jessie by bringing home a beautiful Christmas Tree. This year we (and by we I mean I) decided that trees are old-school and a little cliche, so we started the new tradition of the Christmas Fishbowl. It's been the best decision of our lives. It's beautiful, inexpensive, and lasts forever. I can't wait until we have a bunch of kids who wake us up at 5 am so we can gather around the Christmas Fishbowl and open presents! 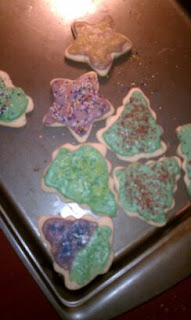 I can't really say that this is a new tradition, since people have been giving Christmas treats since the dawn of time, but one of the things Jessie and I enjoy most is making treats and sharing them with others.

Also coming soon to an apartment near you is Peppermint Bark Puppy Chow. Santa will be staying a little longer at our place.

We love snowmen! We built an awesome one last year (Jerry the snowman; he's frosty's pop-star cousin), and we totally plan on building one this year (that is, if we ever get any snow!). Another snowman tradition we have is collecting snowman ornaments. We've collected one for every year we've been together on Christmas, so we're up to two now!

Every year at the Winter Quarter's Temple Visitor's Center there is a gingerbread display in the basement. People from all over Nebraska build the craziest gingerbread houses and they are all on display for anyone who wants to stop by. It's amazing. People are seriously so creative. If you read Jessie's recent blog, you'll remember that we saw a gingerbread house that housed two missionaries teaching the Grinch about the gospel.

My personal favorite tradition is the Grinch Tradition. I am in the process of memorizing Dr. Seuss's The Grinch, which I will recite to my kids every Christmas Eve from now until the day I die. I love Dr. Seuss, and the Grinch is one of my favorite characters in all of literature.
﻿﻿ ﻿﻿
Anyways, those are our traditions. Like I said, traditions are the best part of any Holiday.

Merry Christmas!
Posted by Jessie and Austin at 10:44 PM