This is the first year I think I've ever stayed home for spring break. It's kind of anticlimactic, but definitely nice not worrying about heading to class or practicing (except I was already done worrying about practicing, muahahaha.) It's also less of a "break" because Natalie never stops, so it's not like we are sleeping in til noon or partying every night. I was asleep before ten last night...not ashamed. As I said though, it is nice to relax at home without school obligations. 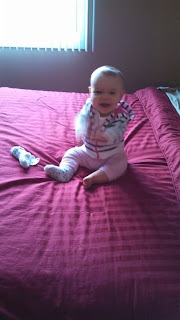 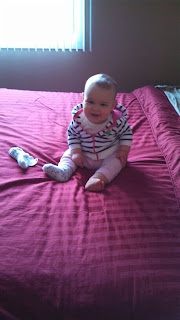 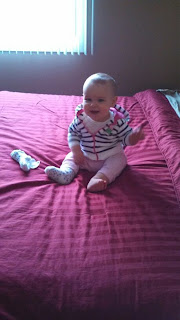 I told Austin I wanted to do something fun, like go to the zoo. He said that the zoo is fun, but not worth driving an hour (paying for gas), the $12 admission fee (each), the food I'd probably beg him to get us, and the hour drive home (more gas). Zoo is a special occasion deal, until we have more kids and buy the family pass and go to our hearts' contents. BUT, not wanting to be the party pooper, he suggested that instead of going to the Henry Doorley Zoo in Omaha, we make the Henry Poorley zoo at home! For a second I was like wow...this is what we've come to? But then I started thinking about all the possibilities and it started sounding really hilarious. I have to admit, the final product was not even a quarter as fun as the brainstorming and giggling about silly money-related names and ways to display Natalie's stuffed animals, but I want to remember this later anyway, so bear with me. 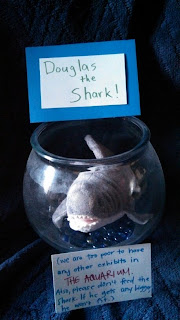 This is Douglas, the shark. The note at the bottom of the exhibit says (we are too poor to have any other exhibits in THE AQUARIUM. Also, please don't feed the shark. If he gets any bigger, he won't fit.) We refer to the fish bowl as the Tank of Bankruptcy. Haha.

Natalie helped build the next exhibits, and we didn't feel like getting up to get paper and markers so I'll just caption the exhibits here. 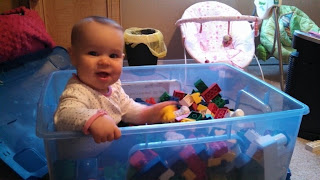 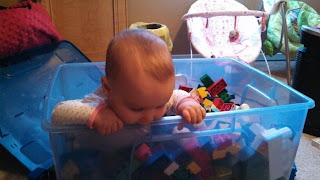 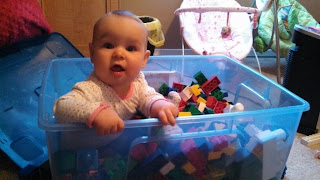 First we have the Catacomb. The zoo couldn't afford to feed the feline anymore, so now she's a dead exhibit. Her friend Kittyzilla was mad so she destroyed the exhibit.


Next we have the Homeless Garden where anyone can come and rest and feed on the plentiful insects. Confederate Jim, the gnome, supervises. 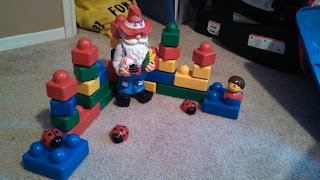 If you're thirsty, you can stop at the Better-off-Debt drink station where Stingy Steve will help you out (but probably rip you off). 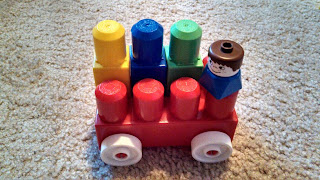 No zoo is complete without a train, so we have the Embezzelment Express. We can't afford to keep it running, however, so it's just an exhibit of its own. 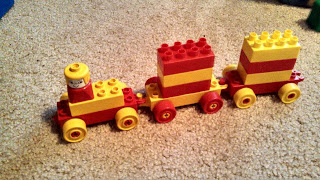 If you're wondering what that smell is, it's probably the Coop of Credit, where all sorts of fowl reside. 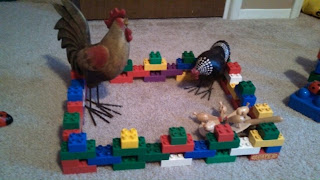 Austin's favorite exhibit, the Watering Hole, involved those foam animals you put in water and watch expand. We couldn't afford to have the exhibit anywhere but the toilet...the animals band together for support.
Other exhibits we had planned included the less-expensive and also less-talented cousin of Shamoo, Lamb-oo, and instead of the Desert Dome in Omaha, the Debt Dome for our javelina, Jorge. But, we were satisfied just having a good laugh over the whole thing, and look forward to the day when our kids can play silly games like this with us.

Also this week, we did typical Spring Cleaning. If you've never had the pleasure of listening to the scouring sound of Scrubbing Bubbles at work, you are missing out. It's our favorite part about cleaning. 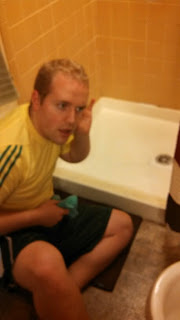 As I changed the sheets I took the opportunity to finally see if the AWFUL creaking of our bed is from the mattress or boxspring...turns out it's the boxspring, and it is deadly. We have to gently lower ourselves one inch at a time into bed so we don't have any chance of disturbing Natalie. (She probably can't even hear it over the white noise in her room, but it is SO out of control. Something needs to be done.) 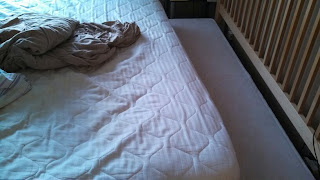 We went to the library and saw the most glorious sight: a little boy was settled comfortably in a chair, oblivious to the world. Harry Potter 1 was in his hands and he was devouring every word, with a stack of the next six books sitting next to him, waiting. Austin and I had a moment where we went back to the first time we read Harry Potter...*sniff*...and wanted to re-experience the magic again. I'm getting emotional thinking about it...

Max and my mom came  up last night to have pizza, Natalie time, and watch Wreck-it Ralph. It was fun, as usual. When they were about to leave Max was like "so...is this what it's like having kids? You just entertain them the whole time and then put them to sleep?" Well, yeah. But it's the best : )

It's ironic that during my break from school I would get the most voluntary homework done, but I was free for a little while one night and decided I'd get ahead in my online class, which I normally despise. This time, it was great! When I decided to do it on my time and not be rushed for a due date, it wasn't half as bad. (The class is called Life Skills for Success...it's meant for freshmen who are new to college and has different modules like Communication, Alcoholism, Diversity. Blegh.) BUT, it was so nice to get it done without being so whiny about it, and especially to know that I won't have another assignment coming up for a week or two since I got ahead. It made me wonder what else in my life I put off and procrastinate, and then bemoan when it's time to do it. It felt so good to accomplish just this dumb class, so I'm sure it will feel even better when it's a more important task, like church callings or housework or whatever else is going on. Positive attitudes, folks!

Posted by Jessie and Austin at 9:58 AM