It feels like we are in the midst of a lot of almosts...almost done with school, Natalie is almost crawling, her teeth are almost poking through, and she's almost weaned. The weather keeps threatening that it's almost spring; it's been in the 30s the past week and we are tired of being cold. And, we don't really have enough to blog about lately, but almost. : ) 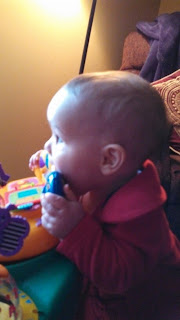 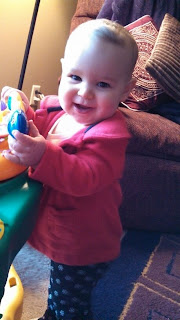 This is Natalie's favorite hang out lately: standing on this particular side of the exersaucer. She likes practicing her standing and balance anywhere, but spends more time here than anywhere else.


﻿ ﻿ I'm accompanying for a voice recital this weekend, so I've had to actually practice (*gasp*) recently...I almost forgot how! I'm also playing in the pit orchestra for Les Mis at the local community playhouse, which is a BLAST - I love being personally responsible for playing the parts that we all know and love, and seeing the music come together. Plus, it's a nice chunk of change, which we'll never complain about! However, the show starts at 7:30pm three weekends in a row, and this presents an issue with feeding Natalie/putting her to bed since she's never liked formula or bottles. I've already nursed her for way longer than I expected to, so this seemed like a good opportunity to move on. (I don't have a problem breastfeeding; I'm glad Natalie has had 8+ months of breast milk and I believe that for the first few months it really is the best option if there are no issues, but I'm perfectly content to give her "real" food now. I think moms shouldn't be pressured to breastfeed for any specified amount of time - every situation is different.) Pediatricians everywhere would probably protest outside my window, but we decided to try cow's milk and Natalie took right to it. We add a little formula powder every other time, and make sure she gets her necessary nutrients through oat cereals etc. We are going on four nights of no nursing before bed...I only breastfeed her right when she wakes up in the morning and maybe one other time throughout the day. Progress!


﻿ ﻿ Natalie Jane has also been working on crawling...she's got the legs down, but doesn't realize that moving her arms forward is part of the deal. Her poor gums seem like they've been trying to teethe for months, and even though we can see the teeth moving closer and closer to the top, we still can't see any pearly whites.


﻿ ﻿
ALSO: We were pretty tired of having to rock Natalie to sleep and pace her room before bed every night, and then walk on eggshells for the next critical five minutes that would tell if she was asleep or needing more rocking. It was time to try something new, so we took the suggestion of a baby sleeping book and did her bedtime routine, put her in bed, and left. Then we went in every five minutes to re-bink and give a little love pat before we went back out and let her whine to her bed. It was awful - I felt like I was in mommy hell and I know Austin wasn't jumping for joy either. BUT, after 33 hard minutes she fell quiet, and was sleeping peacefully when we went in to check. The book said that if you did this every night, your baby would be falling asleep by herself in a week, so we were not looking forward to six more nights of a sad girl. Lo and behold, she figured it out the very next night! We didn't have to go in once. It was jammies, lotion, book, songs, milk, bed without a single issue. Don't worry - it wasn't just a one-night thing, either, because she's been golden ever since and we are REJOICING. It's like clockwork now: 7:50 comes around and we are one bedtime routine away from quiet for the rest of the night. Hallelujah! The kicker? She's been incorporating this into naptimes too! We tried to rock her for the next couple of naps, and she was just not having it, so finally we just set her down and let her do her own deal and boom, down, asleep. Miracles do happen. (AND, she hasn't protested about not nursing at bedtime, so she's just our little rock star!) 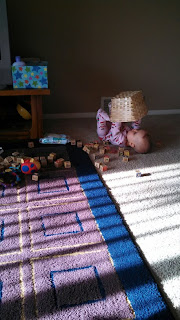 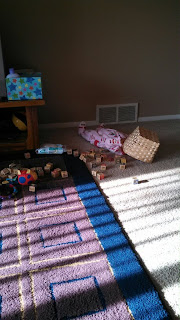 I love watching her roll around and play by herself. She is just so wonderful. She makes the cutest giggles and whispers, literally - whispers, to herself, and then looks up to catch us watching her and gives us a blue ribbon smile. She's SUCH a happy baby, and we love her so much : )

On Sunday we saw a random TURKEY hanging out on the island of a busy road. It tottled off into the busy street, and I swear it intentionally used the crosswalk. I was laughing the whole way to church! 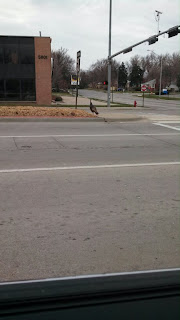 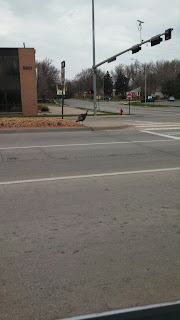 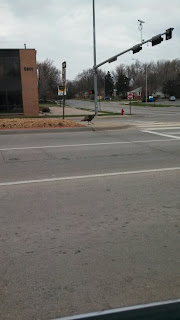