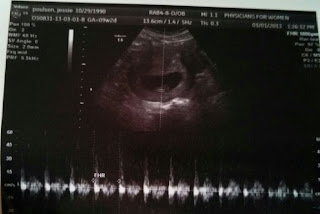 Team Poulsen is adding another player to the roster late September/early October! I thought about posting this on April Fool's to really confuse people, but decided to wait until I was done with school. It's been nice to only have a small pocket of people know that we are expecting; we've been able to focus on everything else that is going on in our lives, and sort of have a little secret. Except it's not really little...another baby is a HUGE deal! Especially since when we found out we were pregnant, Natalie wasn't even six months old. Uh...what? Yeah.

Without going into the nitty-gritty, basically we weren't trying to get pregnant yet (I thought we'd wait at least a few more months) but we...miscalculated...and voila! Hello, baby. I started to get concerned that a certain monthly occurrence wasn't, well, occurring, but I figured my body was still getting back to normal after having Natalie so I didn't think too much about it. A week or two later and I wasn't so sure, but I was afraid to take a test so I kept putting it off. Finally, one day at school I just couldn't take the suspense anymore so we walked to the nearby Walgreens and got the cheapest pee stick. We got back to the Institute (where we always set up camp during the days I have, wait, HAD!, school) and I slunk into the bathroom to confirm what was now pretty inevitable: a big ol' plus sign.

JESSIE REACTIONS:
...what?
Wait, does that mean we're...*whispers the "p" word*
*checks the packaging to make sure*
It's a cheap test, it's probably wrong...
...holy crap.

I sort of went through the rest of the day in a stupor, feeling like there was a bubble around me. I was...pregnant? I didn't really know how to process this revelation, so I shoved it to the back of my brain and tried to gather my wits. Go figure, but it's kind of hard to forget that there is a CHILD growing inside of you, so I think I probably just wore the deer-in-the-headlights look all day instead of the forced calm I was going for.

We got home (Austin: WOOOOOO!) and I decided that one test wasn't enough to confirm something this big. I went to the store and got the brand-name test this time, and took one before bed that night. Positive again, even more clearly. After convincing myself that the best time to take the test for accuracy is really in the morning so this test was probably wrong too, I went to bed.

JESSIE REACTIONS:
...omg. I can't deny it anymore.
...uhh.
Wait, that means they'll be...FOURTEEN MONTHS APART? ARE WE INSANE?!
Holy cow what the beep yalrighty not a drill
...mm, babies are cute
OMGGG I'LL NEVER SLEEP AGAINNNN
...I wonder what this baby will look like?
WAIT! Boy or girl!?
...omg. I can't deny it anymore.
We'll have two kids! Fun! Crazy!
...omg, we'll have two kids, two babies, really.
...beep.
Bring it on?! 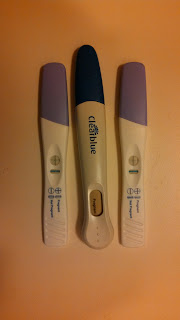 So I officially admitted to myself that we were, in fact, preg on January 30th, Austin's 23rd birthday, two days before Natalie was 6 months old. I was pretty overwhelmed - we knew we wanted lots of children, so it wasn't an OH CRAP WHAT HAVE WE DONE moment, but for me it was definitely OH MY GOSH, HOW ARE WE GOING TO HANDLE THIS? Fourteen months apart, people...that's barely a YEAR. Natalie might not even be WALKING. I was having all sorts of panic-inducing thoughts like "I'm not nursing two babies at once!" and "dang it, I never lost all that weight" and "oh my gosh, what are people going to say?" I think I had to get over this last one first: it didn't matter what people thought or said. This is our life, our family, our children, and we are capable of handling anything. Plus, hey, we'll be two kids down before I'm even 23! It's hard to be married in college though and growing our family when most of the populous around me goes out to the bars on the weekends and has no idea what a glucose test is or how many ounces a baby is supposed to gain for the first few months. It feels isolating sometimes, even though I love being married and having my baby girl and this new baby. It's one of the biggest reasons I'm SO glad to be done with school - I feel like I don't have to defend myself and my "atypical" life choices for the "average" 22-year-old. Even though everyone at school is very supportive and loving, I'm still the only one who occasionally brings a baby to class, you know?

Anyway. We kept it a secret until the first ultrasound on March 1st, and then we told our families but had them keep quiet. I think I was still getting used to saying "I'm pregnant" again so soon after having our first baby. I didn't want this to get in the way of my senior recital, I didn't want it to always be the topic of discussion when I came into class, I just wanted to finish school and then officially trade "student" in for "full-time mom." I've been showing since mid-April and there are only so many baggy clothes in my closet, so we figured we'd make it public before it got awkward.