Last year we went to this awesome fireworks show for the town of Palmyra, NE's annual city celebration (see this post); it was so great that we vowed to go again this year . We had mostly forgotten about it, but we randomly remembered and looked it up and found out it was in two days! Good thing we checked. Austin's bro came over (thanks Aaron!) after we put Natalie down and Austin and I went on our second annual fireworks adventure. 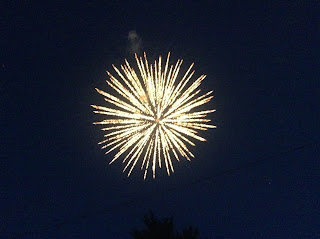 the fireworks are HUGE and riiiight over our heads - it is LOUD and exciting! 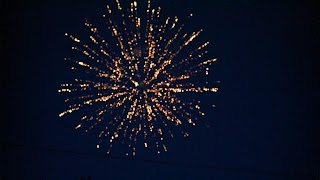 Things we love about this event:
-the small town feel
-how incredibly close the fireworks are
-the semi-scenic twenty-minute drive. and by "scenic" I really mean "Nebraska highway."
-it's free!
-the sort of undiscovered air about it...we don't know anyone else who goes 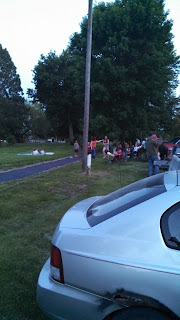 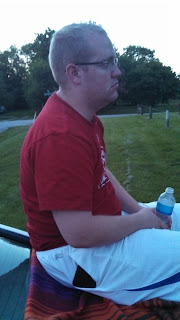 There was a party going on a couple cars down from us, but we weren't invited...fine by me, since they were all country tweens who tried to go on mini dates with each other the whole time. Austin was depressed that we were loners. (ha, yeah right...he'd rather die than deal with that kind of gathering!)


And now, enjoy the latest of our "Stardines" poems (see this post if you forgot what that means):

"Hmn nonhs shplag," muttered the mutterfly.
He often muttered nonsense to random passersby.
"What was that?" They'd ask, with confusion in their eyes.
"Lmnop rhongmon," he'd reply, in the way of mutterflies.

The mutterfly is constant in his efforts to converse,
But no one understands him; they think he is the worst.
They think he is insulting them and tryin' to pick a fight,
But all he really wants to do is talk, and show them he's polite.

The mutterfly is destined to a life of misery
Because no one wants to listen to his inanity.
He won't stop trying, though, to talk to everyone,
He'll proudly state that hngmlon, and mrnlrmenorun!

There once was a chimp with a limp
Who was called names like "loser" and "gimp"
He cried every day
Since he couldn't play
On the playground, 'cause he was a wimp.

This Limpanzee tried very hard
To work out and not be a lard
But his armpits were sore
And his crutches hurt more
than a pig in a leotard.

He couldn't keep up with the crowd
So he just cowered under a shroud
His life was so sad
He's quite a poor lad
Since with this limp he's forever endowed.

Posted by Jessie and Austin at 9:52 PM