Harry Potter and the American Muggles

When it comes to Harry Potter, I have always considered myself completely hipster: I liked it way before it was popular. I used to consider myself the biggest Harry Potter fan outside of London. Then one day I met a girl named Jessie who liked Harry Potter as much as I did. So I married her. Now we are living happily ever after, united by our love of the boy who lived.

As everyone who has met Jessie and I already knows, traditions play a huge part of our lives. Recently, we sat down and wrote down a month-by-month list of all of the traditions that we have. The list of July traditions was looking pretty meager, so Jessie and I were racking our brains to try to come up with an appropriate July tradition. Obviously, everybody has the 4th of July tradition of lighting fireworks, but we like to come up with our own unique traditions. Eventually, Jessie had the greatest idea I've ever heard. She said, "We should make July Harry Potter Month!" And of course I was all in.

So, after our first week of Harry Potter jubilation, we decided we needed to document all of the things that have made this month the most Potterific month of our lives. 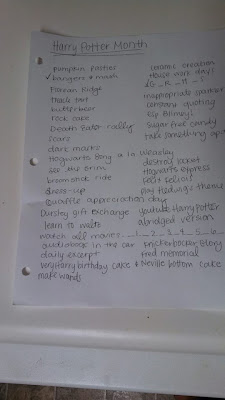 -I wore the Gryffindor colors of Red and Gold to work.
-We had the traditional British delicacy Bangers and Mash (sausages and mashed potatoes).
-We read aloud the scene from Harry Potter and the Sorcerer's Stone where Harry goes to the zoo with the Dursleys.

-We watched Harry Potter and the Sorcerer's Stone on DVD.
-We learned everything we possibly could about Hannah Abbot from Hufflepuff. Yikes. Harry's life was a cakewalk next to what Hannah had to go through.
-We made pizza and used pepperoni to write the letters HP on it. We also cut a pepperoni into a lightning bolt-shaped scar that we placed above the HP. We also hid a 'golden snitch' under the cheese, and the person who bit into the snitch was awarded 150 points!
-We read an awesome Gilderoy Lockheart monologue from the second Harry Potter book. "Harry, Harry, Harry." 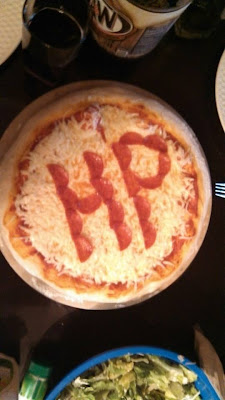 -We watched Harry Potter and the Chamber of Secrets on DVD.
-We found out on Mugglenet that Hagrid was in Gryffindor before he was expelled.
-We read a Professor Trelawney scene from the third book. Professor Trelawney found "The Grim!" in Harry's tea leaves. (we say "The GRIM!" every time we see a dog.)

-We listened to the Harry Potter audiobook, read by Jim Dale.
-We incorporated the word 'blimey' into our vocabulary.
-We planned our 20th anniversary of Harry Potter vacation to Harry Potter World in Florida.
-Excerpt from the 4th book: Dudley eats a piece of Ton-tongue toffy that Fred and George conveniently drop within Dudley's reach.

-We went to Paint Yourself Silly and painted a bowl with all 4 of the Hogwarts houses emblazoned on the outside.
-Scene from book 5: Harry talking to Luna Lovegood about nargles hiding in the mistletoe.
-Looked up funny Harry Potter pictures. 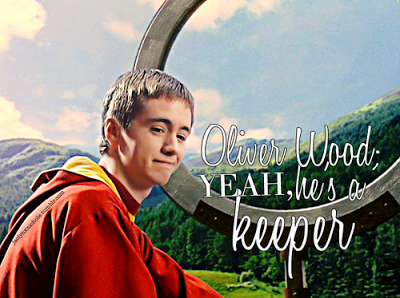 -We made pumpkin pasties and butterbeer! They were both extremely delicious!
-We listened to the Harry Potter soundtrack while cooking the pumpkin pasties.
-Harry Potter and the Half-Blood Prince excerpt: Phlegm (Fleur Delacour) is staying with the Weasley family, and all of the males are smitten with her, but all of the females absolutely despise her haha.

-We watched Harry Potter and the Prisoner of Azkaban on DVD.
-Deathly Hallows Excerpt: Harry receives all of his birthday gifts for his coming-of-age birthday.

Anyways, we are having a total blast! Harry Potter Month is the greatest thing that has ever happened to our marriage!

Stay tuned for next week's activities, which may or may not include a death eater rally!

Posted by Jessie and Austin at 9:32 PM