When someone hasn't seen Natalie in a while their first comment is always about how she's changed. Living with her, we see the process of change every day so it's not as startling to us. But after being gone from Sunday-Sunday, I now know how they feel - my baby girl seems so different in just that little sliver of time (which felt like an eternity). 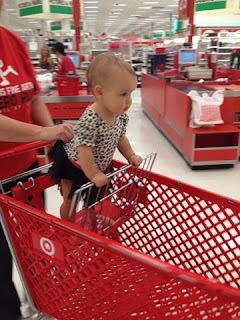 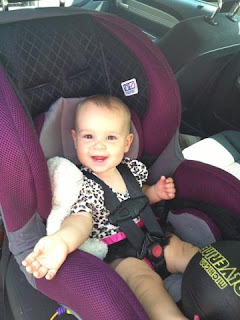 In one week, Natalie:

-learned to squeak and has a higher-pitched cry
-takes the same amount of steps (or more) than crawls
-switched from baby babbling to more intelligent, conversation-like babbling
-points with her index fingers
-dances any time when music is playing
-doesn't wobble or teeter when she stands up or sits down by herself
-is getting better at sticking the shapes into their holes in that one toy
-doesn't try to get in the bathroom anymore
-regards diaper changing as okay (as long as it's quick) instead of torture
-keeps the blanket on during naps/at night
-is HEAVIER! and bigger overall, and has more hair 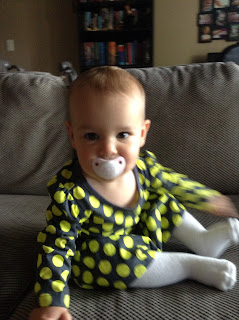 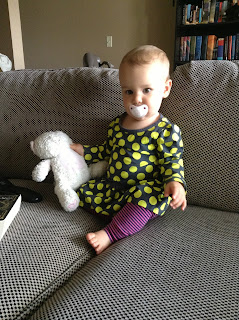 Austin had a BALL choosing crazy outfits for her - the left is the appropriate church version and the right is the mismatched galore version : )

I got home last night right at her bedtime but Austin had kept her up so we could reunite, and she was sleepy so she didn't completely freak out but she was excited enough that she quite literally pooped her pants. Glad I inspire than kind of reaction : ) She was full of smiles and we had cozies and changed her diaper and sang songs and then put her to bed since it was past her bedtime. It was WONDERFUL to see her again, and my husband too of course. 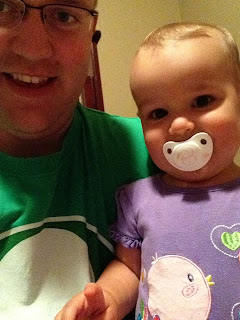 I couldn't help feeling sort of overwhelmed and sad though - I felt like I missed out on SO. MUCH. My baby isn't a baby anymore! I think she just made that transition fully this past week, while I was gone. It's hard to describe, but I felt like I had to get to know her again, my own daughter! Austin reassured me that it was just because I had been gone for a week and that she seemed more different than she really is, but that's my point! I don't want to miss out on these differences! I don't want to be out of the loop! It was nice to be on vacation, but to be honest I went to bed last night wondering if it was worth it to be away from my ever-changing child so long. When she is older and more constant then that's different, but right now she's just developing and learning and turning into the toddler version of herself and I don't want to miss one second! I feel jipped as her mother to have witnessed these changes second hand, after everyone else.

(Speaking of everyone else, THANK YOU to all who helped while I was gone! We couldn't have managed without you. Natsby loved the attention and spending time with her extended family and friends.)

I've spent today following Natalie around, doing what she wants to do, giving lots of hugs and kisses and loves and cozies. She loves looking and pointing at the picture frames around the house (another new thing) and she made up a game where she hides and then retrieves a little cat in the bookshelf. She seems kind of clingy, as if she's afraid I'll leave again. She reaches for me quite often - she'll be playing happily and then notice me all of a sudden and demand to be picked up. Her nap this morning was much shorter than usual, which we kind of expected - she was too eager to play with Mommy to sleep very long! 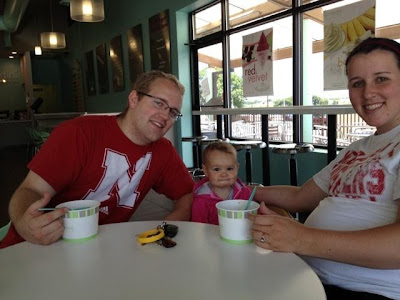 In the midst of playing and bonding, I've been trying to wrestle our apartment into submission...I don't think it's ever retreated this far into desolation. My priority has been to be there for Natsby and make sure we get lots of hang out time, but I can't sit idly by for too long when I'm surrounded by clutter and mess. One little thing at a time, right? I don't know what I was thinking when I signed up to have the missionaries come for dinner tonight while we are still getting our lives back on track, but at least that will force us to pull it together. Brats, homemade mac and cheese, and jello, folks! 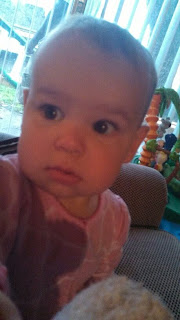 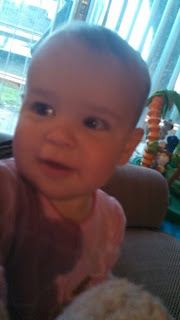 Anyway, moral of the story: I don't want to be away from my family for a week again. I don't want to miss out. I don't want to come home and feel kind of like an imposter. I love being a mom and definitely do not feel as fulfilled when I am away from my family. I know a lot of moms are shaking their heads and saying "Are you crazy? I would LOVE a break!" but I'm not to that I've-HAD-it! point yet where I feel like I need to get away...talk to me in five years I guess : )
Posted by Jessie and Austin at 1:24 PM