I figured I'd do this post now instead of on October 1st so that I don't miss it - I'm pretty sure that other than becoming a big sister nothing major will change within a week, so it should be pretty accurate.

-pretending her crib is a trampoline
-climbing into her "throne" and reading to herself
-pointing to everything still; this week she started waving regularly too
-adding "woof woof" and "puff puff" (mimicking a steam engine) to her repertoire of sounds
-learning and correctly identifying new objects daily, such as temple, shoes, ball, juice, banana, and baby
-loving all the "adult" food she can get - spaghetti is a new fave

One day Natalie figured out that the couch cushion can come off and demanded that it be removed immediately. She loves crawling up onto the shorter ledge and getting cozy there with her stack of books always close by. It is so sweet to see what she does independently when she doesn't realize I'm watching - she's so curious and particular and intelligent.

I came into her room when she was supposed to be napping the other day and she was sitting down with her legs sticking out between the slats. As soon as she saw me she scrambled up and retreated to the back corner of the crib and proceeded to start jumping, an anti-nap tactic that she is particularly fond of.

Also, she just LOVES reading. I'm not exaggerating when I say that she would rather do that than anything else - nothing is cuter than her picking up a big board book and bringing it over to wherever we are. As avid readers, we couldn't be prouder or more willing to comply with her reading desires. We introduced Chicka Chicka Boom Boom this past week and it's her new favorite, although she still loves her "classics" - Freight Train, Rainbow Fish, The Best First Book Ever, and Cuddles. You should see her face light up when we hold a book out to her - it is such a cool feeling to realize that she is soaking EVERYTHING up and learning so much, and really understanding what's going on. I love watching her learning process - she is SO SMART! I'm sure every parent says that, but really. This girl has a brain.

Natsby also LOVES being outside. She knows that when I show her the shoes it means we're going on an outing, and she gets so excited. We call the courtyard/grassy area behind our apartment building "the backyard" and Natalie loves exploring all over it. She found a pine cone on our jaunt yesterday and was utterly transfixed. She found some dirt on our patio today and tried to eat it but then gagged - she didn't try to put it in her mouth again haha. 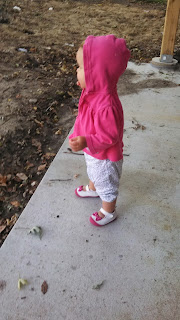 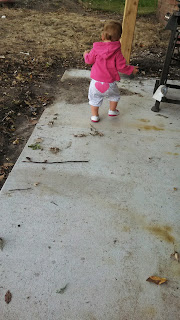 We've been listening to a lot of music lately - Natalie loves dancing to Bruno Mars "Treasure" (SUCH a catchy song) and the new Jack Johnson CD is awesome. We've also been getting to know Seussical the Musical since I'm playing for that show next month - it has such a groovy overture! Classical music has been incorporated more as well - Natalie was introduced to the Rachmaninoff station on Pandora this week. I miss playing the piano - I need an excuse to practice. (Ha, a different sentiment if you asked me a year ago!)

I had my FINAL pregnancy appointment today - wooo! (At least until next time). Natalie was being destructive in the room so she got confined to the sink. 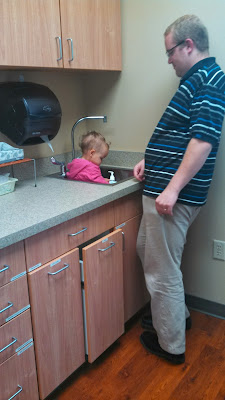 She still adores her Kitty - I think it is so cute to see her carrying it around so close to her chest. She also loves her blankie and occasionally pulls it out of the crib so she can lay down on the floor for cozies. She's a lot like her mommy that way : ) 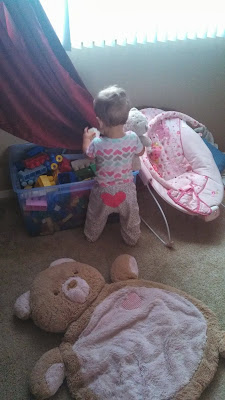 I know we say it every time, but we love our little girl more and more every day!