Yup, we're taking the plunge, people: scheduled induction for the evening of September 25th. No going back now! He could still make his grand entrance any time before then, but we know for sure that he will be here in less than two weeks. Crazy! I'm excited to meet our son!, feeling ready, looking forward to getting my body back, and feeling that 24/7 impatience of waiting waiting waiting. I'm glad that at least something is on the calendar now, and I'm sure the days (we are literally at the point of DAYS!!) will go quickly. 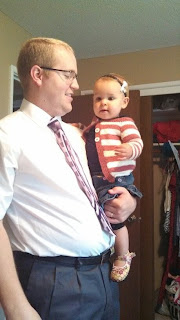 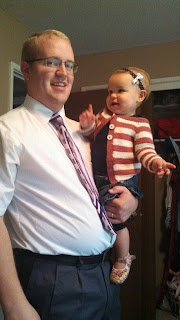 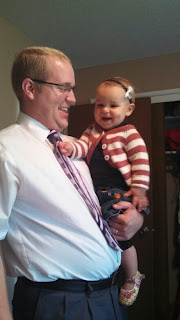 It has been SO much easier being pregnant while already having a child. I originally thought that it would be more difficult, and it definitely did have its challenges, but mostly I've just been so focused on Natsby that my pregnancy has flown by without me having a ton of time to think about it. Even now in the ahh-is-he-here-yet?! phase I'm still distracted enough with our active 13-month-old that I don't have a chance to be Depressy Jessie like I was last time. That was a total yikes - I'm still apologizing to Austin for my crazy hormones when it got close to having Natalie. I'm definitely looking forward to having Stockton and would prefer him sooner rather than later, but it's been a lot better this time emotionally.

I'm not sure how Natalie will react to her baby brother - I think it will be a mix of ignoring him, trying to poke him, flat-out sitting on him/whacking him, and crying because she wants me to hold her and not him. Or because he is crying. Or because she is still having an inconsistent nap deal. I was going through our baby boy stuff and she kept knocking over my piles of neatly arranged blankets and clothes, and finally sat in the box so I would stop working on his stuff instead of playing with her. She jeal. 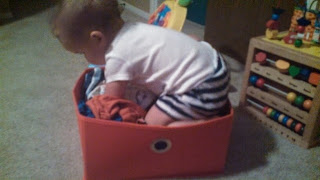 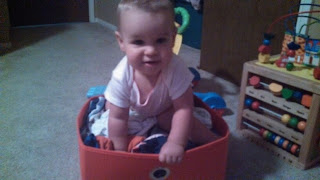 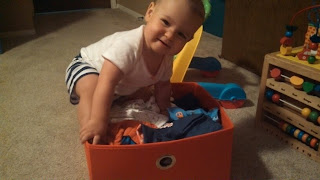 She makes me laugh : ) We've had lots of fun play time lately. She loves pulling the kitchen towels off of the oven handle and carrying them around the house haha. She also loves the thrill of my glasses case which makes a loud snapping sound when it closes. 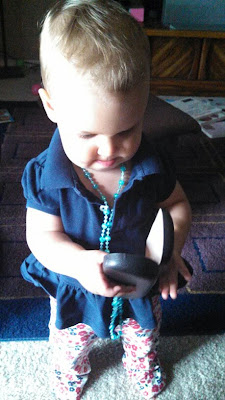 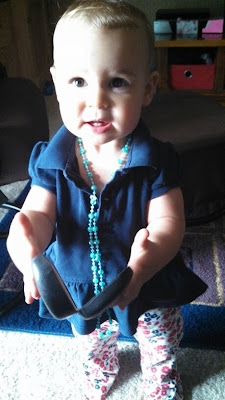 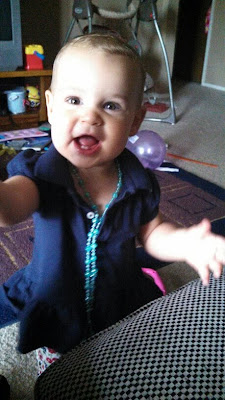 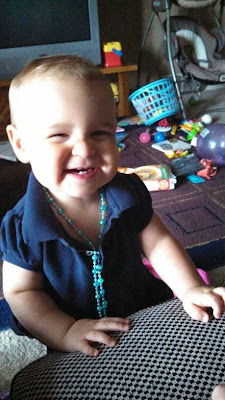 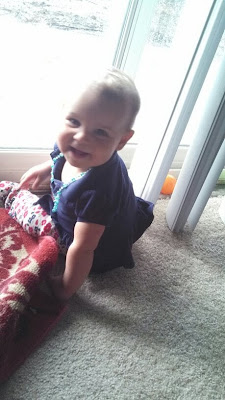 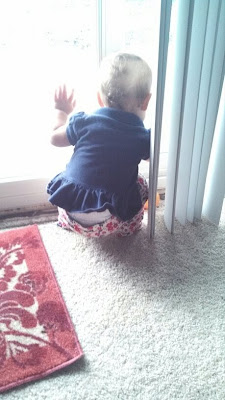 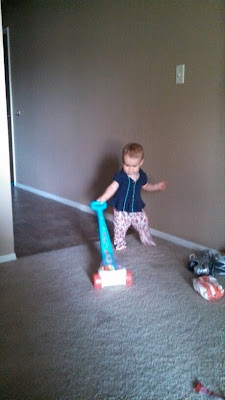 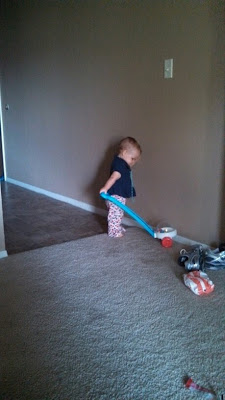 One of her new favorite activities is bouncing in the bouncy chair - she climbs/falls in, positions herself, looks back at me with a huge grin and proceeds to launch her body up and down in the chair. It is HILARIOUS, and she loves it! 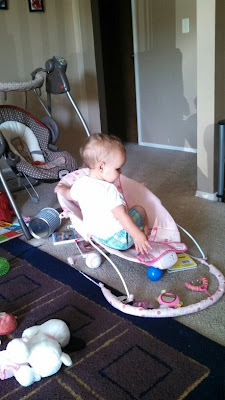 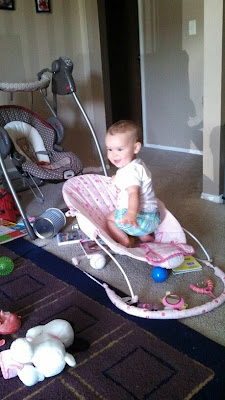 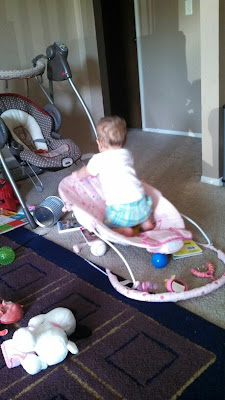 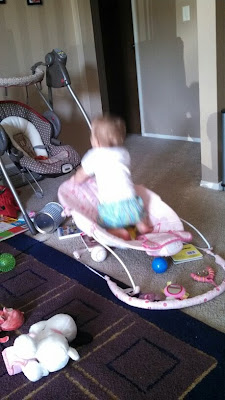 Natsby came to my appointment this week and enjoyed the toy room more than the ultrasound room, although she did enjoy opening and closing the doors and pushing the rolly stool around. I know she doesn't really comprehend what's going on, but she did get quiet when she heard her brother's heartbeat : ) 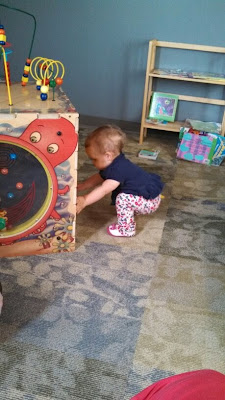 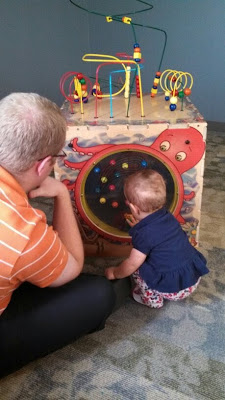 I think she gets frustrated more easily lately because a) she's more independent and b) she can't effectively communicate. For instance, she had this container of bubbles that she loved to play with, but she would bring it over to me, I'd open it and start blowing bubbles, she'd try to grab the container which I wouldn't let her do, she'd get mad so I'd put the cap back on and then hand it to her, but then she'd give it back to me and want me to blow bubbles again...until she got mad again. Finally she lost bubble privileges and I hid them behind her changing table cushion, but she's too smart for out-of-sight/out-of-mind mentality and wouldn't rest until she had them back. She played with them nicely for a while but then started the crankies again so instead of hiding them I just put the container on top of the tv and let her stare at them (and get very upset) as punishment. Aren't I a nice mommy? 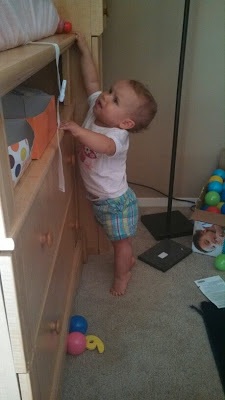 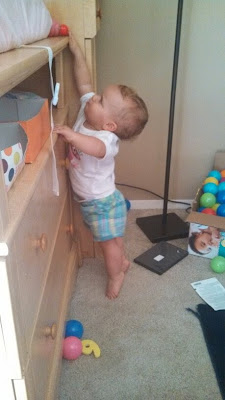 her tiptoes are awesome

Her current favorite books include our wedding picture book, a little book I made with extended family pictures in it, and the Richard Scarry Best First Book Ever. She pulls them over to me (they are all bigger books) and requires at least three readthroughs of each, which takes a considerable amount of time, especially the Scarry book since it is big and long. I needed to get something done but she still wanted to read, so I set her on the floor with board books that she couldn't ruin and hid the other books behind the couch cushion. Being the smart little Natsby she is, she promptly found my hidden books and was distressed at the fact that we were not reading them. I decided reading to her is 100% more important than any other task I needed to accomplish, so we sat and read some more. Our dream come true : ) 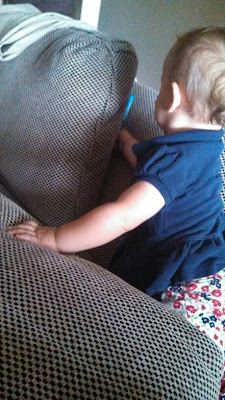 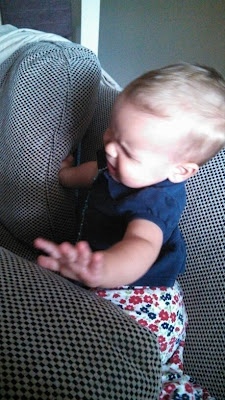 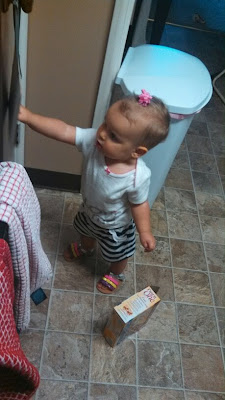 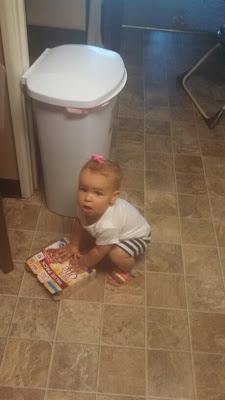 Stay tuned...Stockton will be here soon! In the meantime, we will just continue to play : )
Posted by Jessie and Austin at 9:07 PM