The Wizard of Oz has always been one of my favorite movies. A green-skinned witch, a gingham-clad little girl, a walking scarecrow, a talking lion, and a rusted tin-man stuck in the forest=all the ingredients for the greatest story of all time.

Years later, I heard that there was a book out called Wicked, by Gregory Maguire. It was critically acclaimed, and was advertised as the "long-awaited backstory to the Wizard of Oz." Needless to say, I was excited. Unfortunately, the book was smut. Way too scandalous for my tastes. 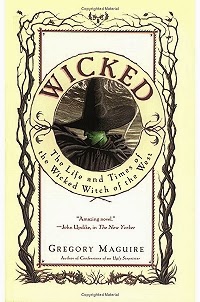 Then along came Wicked the Musical. I avoided it for years, thinking that it would just be more of the smut that the book provided. When I heard the soundtrack, however, I fell instantly in love and became completely obsessed. I had my brother-in-law, Samuel Mark Plumb, burn me a copy of the soundtrack, and I proceeded to listen to nothing else for the next month or so. The music is awesome, and is extremely clever, providing lots of tie-ins and foreshadowing for The Wizard of Oz. For example, in the song "Dancing Through Life," a character named Fiyero sings, "Life's more painless, for the brainless," and "Life is fraught less, when you're thoughtless..." Now, the reason that these lines are so clever is because Fiyero later becomes the scarecrow, who actually is brainless and thoughtless.

So, after singing nothing but Wicked songs for over a month, I was surprised by Jessie when she told me that she had bought two tickets to see Wicked in Des Moines! I was super-excited, but still a little worried that it would be too scandalous for my taste, so I looked up the plot summary on Wikipedia (which, despite what everybody says, I find to be completely credible). I found out that the musical only loosely follows the book, and that it is completely clean! 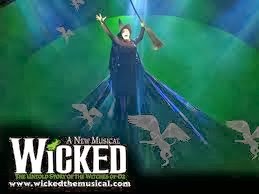 Recently, Wicked was in Kansas City, and I went with my mother-in-law, Jill, and my brother-in-law, Max, and it was every bit as good as the first time I saw it. Soon, Wicked will be coming to Omaha, and I will definitely be going again.
So, in the words of the jubilant citizens of Oz, "GOOD NEWS! SHE'S DEAD! THE WITCH OF THE WEST IS DEAD! THE WICKEDEST WITCH THERE EVER WAS, THE ENEMY OF ALL OF US HERE IN OZ, IS DEAD!"
Posted by Jessie and Austin at 9:15 PM