We've lived in this apartment for a year and several months now, and this week I cleaned out the pantry for the very first time. It wasn't gross or anything, just chock full. I had no idea we could even fit that many cans in one small space!

I should have taken a picture of the actual pantry, but just imagine a slim, four-shelved little closet. It's a miracle that all of this food was stuffed in there. I unknowingly had seven cans of chicken stock, 9 cans of tomato paste, and, wait for it...11 cans of beans! This isn't even supposed to be our food storage, just our day-to-day usage, but it was lost among all the crackers and puddings and pastas so I kept buying more, thinking we were out. I won't have to shop for non-perishables for a while! 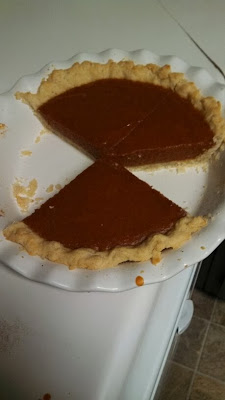 In other news, I'm finally a true housewife: I MADE A REAL PIE!! And it was a success! Pumpkin chiffon (a lighter taste and texture than traditional pumpkin pie) recipe from my Grammy Bee with homemade crust (of course) and fresh whipped cream. I am so proud! I don't even like pie, but Austin thinks it is one of the wonders of the world so I was happy to serve him. Also in recent baking history: pumpkin snickerdoodles, eggnog snickerdoodles, and pumpkin bread with butterscotch baking chips, all super delicious.

-chocolate covered cherries, omgggg. I can't get enough. My mom cannot STAND them, but she buys them for me every time she seems them in the store this time of year. True love!

-the lesser-known but no less important Christmas song "Percy the Puny Poinsettia" was introduced to me by Austin and it's the best, go YouTube it now! In honor of the song we buy our own Percy, the lamest, weakest, wiltiest plant of the bunch. After some water and love it is much perkier, but not traditionally beautiful. We laugh every time we see it. 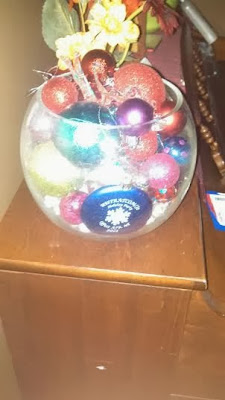 -Ahh, yes, the Christmas Fishbowl, back for another year. I'll post a better picture later, but Austin looks forward to the CFB all year, not kidding. He claims we'll never get a traditional tree ever again (lies...how are you supposed to put presents under a fishbowl?!) because the CFB works so well. It does have a sort of charm, I'll admit : )

I also love listening to Christmas music, the tangible cheer in the air, and centering our thoughts on the things that matter most. It's a happy time of year!