We are all healthy now and I am SO grateful! Nothing like being sick to make health feel like more of a blessing. Austin was sick for a week straight pretty much which was tiring for all of us (i.e. why Blog Wednesday failed last week) and hopefully we can now shimmy out of sick season safely. (oi! alliteration!)

Also in the "health" grain we've been trying to eat healthier and it's been cool - we got a juicer and I have to say: fresh, cold OJ that you personally squeeze (or I guess let a machine squeeze for you) is extremely satisfying. Natalie L O V E S it, can't get enough. Sometimes we mix a grapefruit in too. YUM. 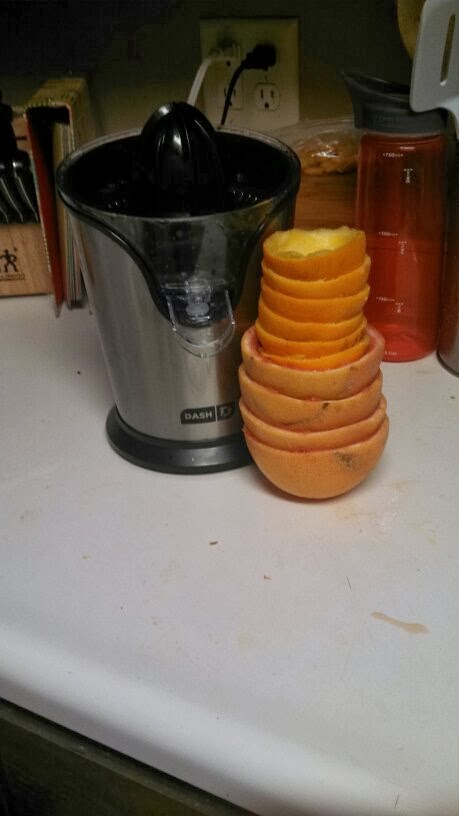 We also made lasagna with pepperoni instead of beef and slices of zucchini and yellow squash. Surprisingly delicious!
I suppose it is winter, after all, but we are tired of being freezing! It makes getting out of the house harder because I feel bad taking the children out in the cold. SPEAKING of frozen, though, we finally saw Disney's Frozen and LOVED it! You should absolutely go see it if you are reading this and haven't seen it yet. The music is enchanting and the little snowman is completely hilarious. We've been singing the songs all week! 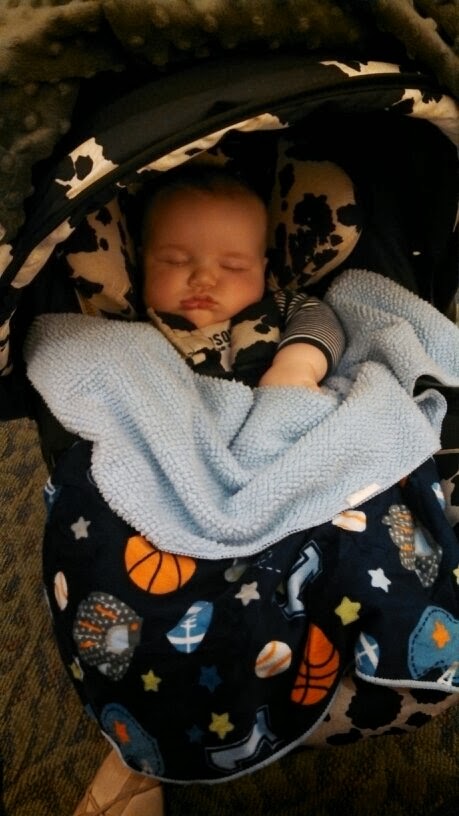 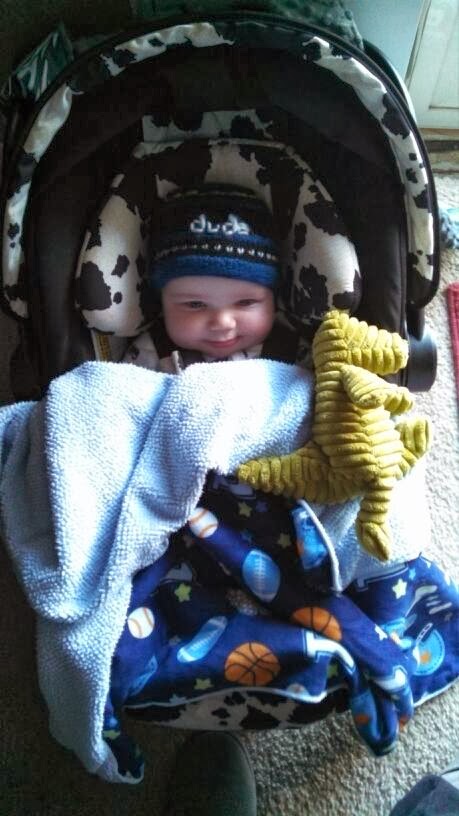 We've been playing, as usual, and Natalie has found some new spaces to invade: 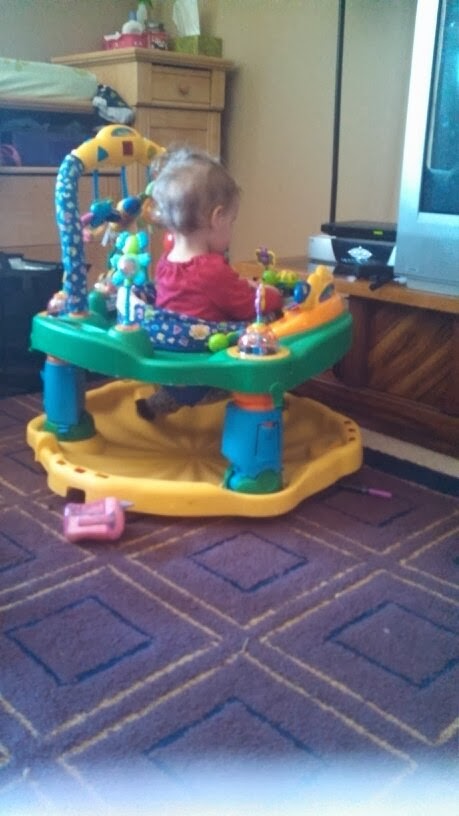 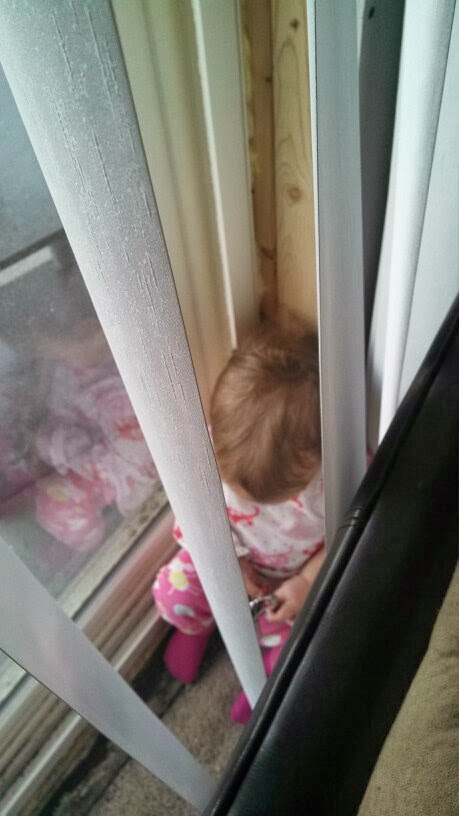 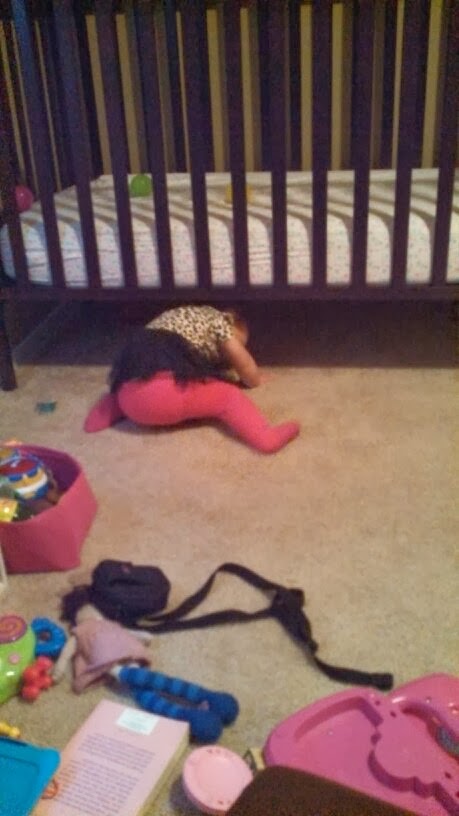 We recently returned the exersaucer to the living room and Natalie's poor legs are so scrunched, haha. 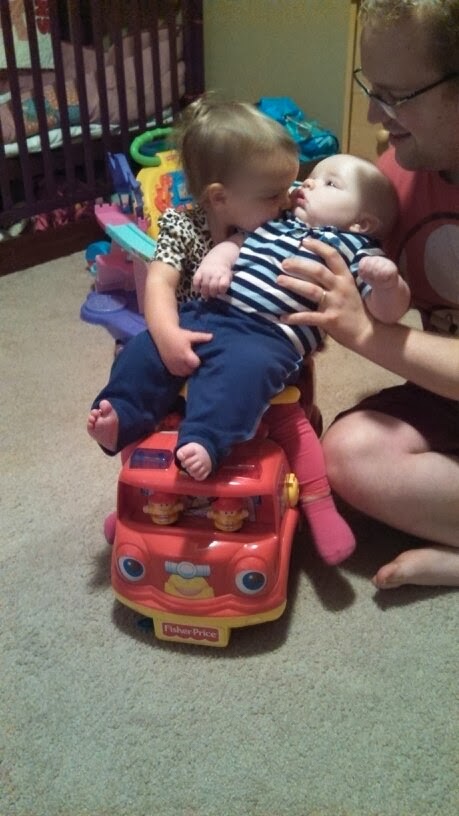 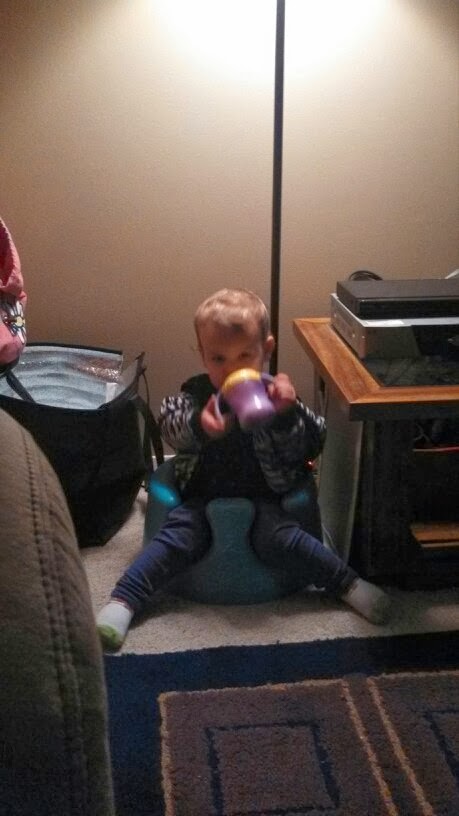 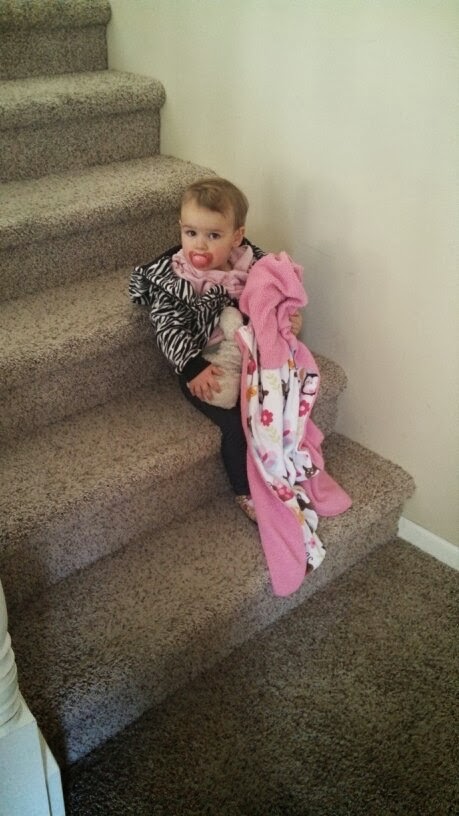 In other news, we tried taking Natalie's bink away and...it did not go well. She screamed for an hour before bed and then woke up freaking out three times in the middle of the night - this mommy's heart was aching and breaking the whole time. BUT: she was SO MUCH NICER during the day! I don't know why but without the option of a bink/sleeping without it she was in SUCH a better mood. Hardly any tantrums, she just happily played and hung out with me instead of flailing and being frustrated. Interesting trade-off. Anyway, she has the bink again, but starting Monday she will be binkless! 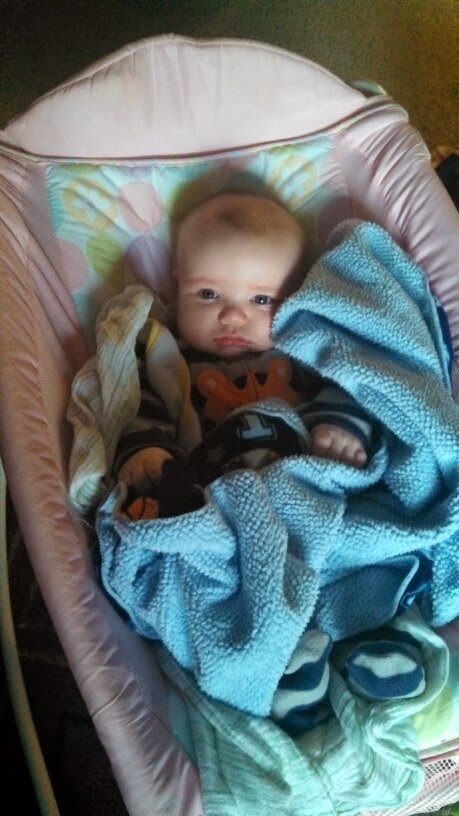 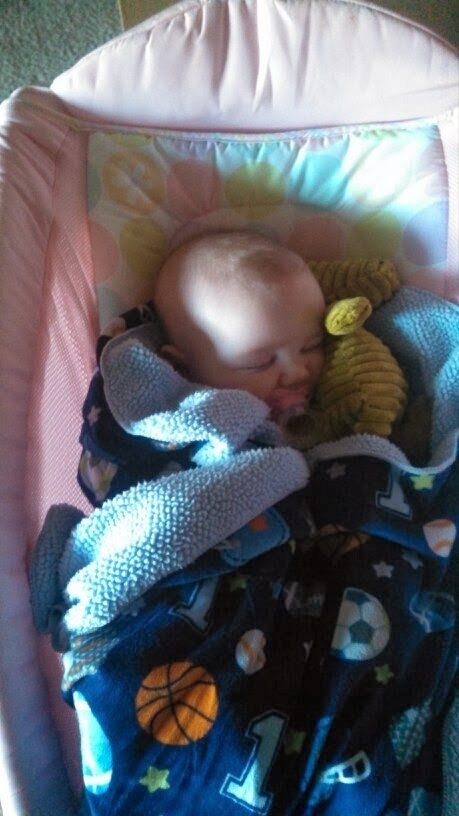 Meanwhile, this little guy is soaking everything in his little world up. He surveys the scene and is content to just watch what's going on. He's trying to sit up - he might even conquer that before he rolls over. It's almost time to transition him to the crib, so start sending happy crib sleep waves our way! 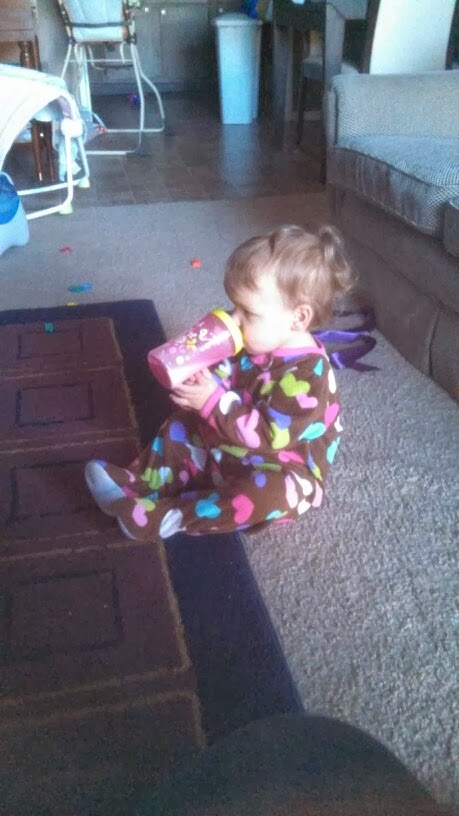 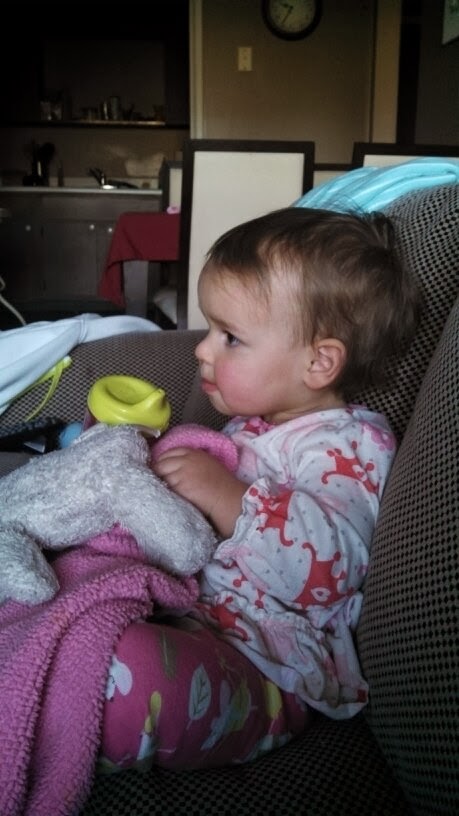 Literally first thing she says every morning after "hi!" and "momma" is "beetho?" SHE LOVES THAT MOVIE! Actually she loves the first two Beethovens equally. Yes, I have them memorized. 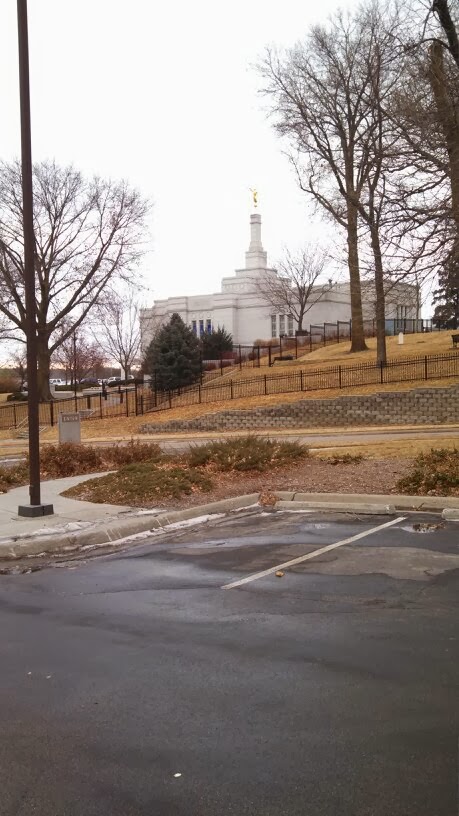 Thanks to some sister-in-law help (thanks Kenz!), I was able to finally go to the temple for the first time since Stockton was born. It was nice, as always, but I'm looking forward to a time when I can go without worrying about my young children and how they are behaving with babysitters.

Look at this sunkissed princess at story time: 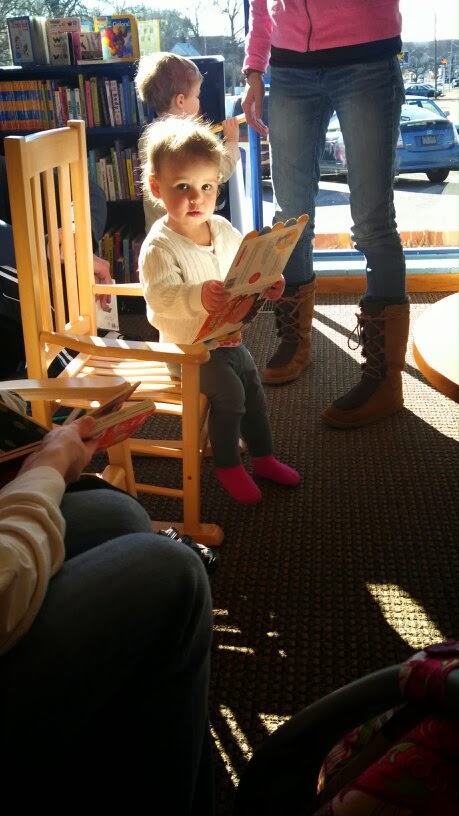 She is the best. 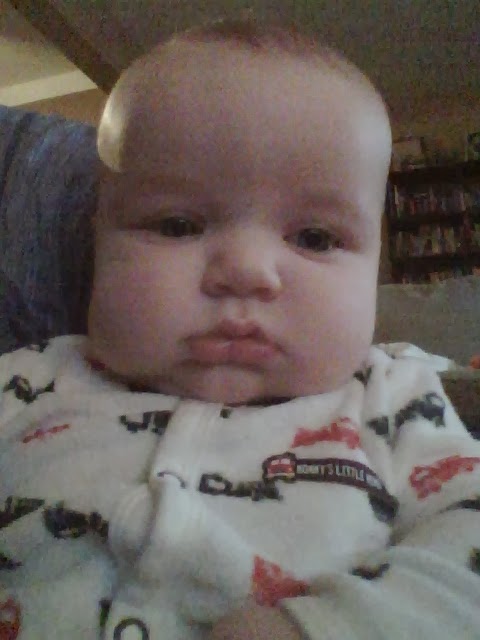