For my first two years of college I often went home to go to church with my family instead of at the singles ward. Some of the boys thought that was pretty delinquent of me to always ditch out so they called me "The Bum Plumb" behind my back and only told me once I was married and left that ward for good, ha.

As I was running today I remembered that random nickname and thought to myself, "I'm not a bum!" and it made me more proud of my fourteen-minute jog. I've been trying to find my ideal way to lose weight and get back in shape - gym membership? workout classes? at-home videos? - and I haven't had much success, mostly because I haven't been consistent in anything. I thought about the last time I really and truly felt fit and great about my body and it was as a college freshman in ROTC...obviously I can't be in that situation again (which is too bad because talk about a great workout!), so I thought back to the next best fitness time in my life and I realized it was cross country in high school. It feels so good to be able to run for a long distance (i.e. more than half a mile, ha) - it's a satisfying feat to be in good running shape.

SO...I'm on the run again! I started a week ago and went five days out of seven. The longest time I was out was 25 minutes and the shortest was 8. I asked my runner friend for beginner running advice and she suggested run a little, walk a little, run a little, walk a little etc until you can run father and longer, then you can worry about distance and/or time. I've been following that idea, running (okay, "light jogging") until I need to walk and then pick it back up again.

I feel so confident and proud and awesome when I get back after a run. It doesn't matter that I only went for 11 minutes, I did it and I felt fabulous for getting out there and improving one step at a time. Running endorphins seem to be in their own category of feel-goodness, at least for me. I'm planning on continuing my runs and hopefully working up to more time and mileage, but mostly it just feels so kick-butt to be doing something athletic and feeling the fresh, freezing air and knowing I'll only get better. I try to channel the Rocky IV training montage...eye of the tiger, baby! 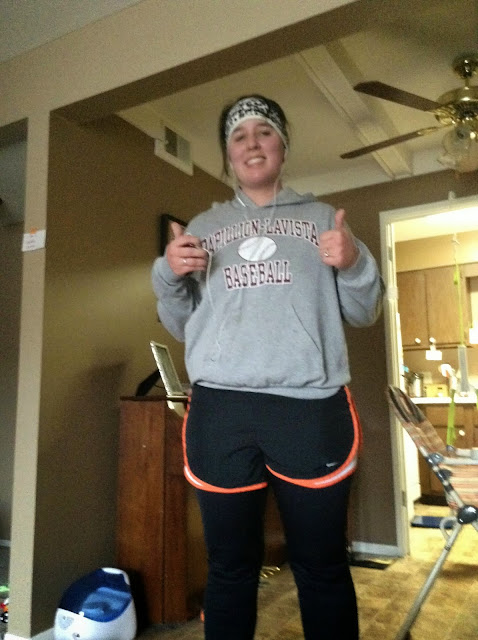 Posted by Jessie and Austin at 3:54 PM