Well, three weeks later and I can say that I SURVIVED! Here's my C-section experience (so far) in a nutshell:

It wasn't as bad as I thought. 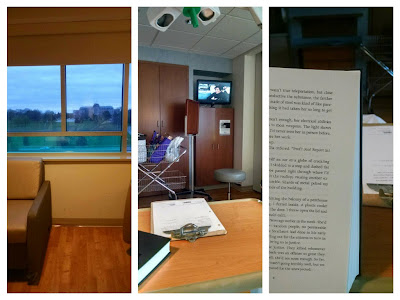 I showed up at 7 to be admitted, get my IV started, and basically wait around for 2 hours. I had my neighbor drop me off while Austin got the kids ready for the day, and he joined me later. It was actually very relaxing, just sitting in the hospital bed, no one bugging me, not feeling any pain, watching Keeping Up With the Kardashians (did I just admit to that?) and reading my latest BranSan, Firefight. 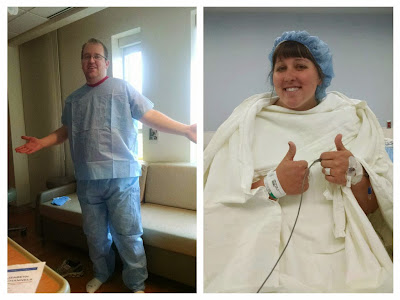 Austin killed it in the scrubs, and once we got into the operating room there were like three nurses ready to cover me with warm blankets. I was certainly not complaining...warm blankets might be the best part about having a baby. The anesthesiologist (Dr. Sailor) was one of the best doctors I've ever met - he made me feel so comfortable and comforted and informed and calm. I felt even better when my OB, Dr. Jenna Fiala, showed up, but it also made me more nervous like HEYYYYOOOO it's time to cut your stomach open! She knocked on the OR window to wave to me before she went to change, wearing a sweatshirt and holding her phone and water bottle...it's just an image I want to remember because I remember thinking "wow, she's so normal!" Also, she is the best. I love her.

The worst mental part was walking into the OR. It just felt so unreal - I wasn't in pain, I was basically naked, they have me sit on this little table and the operating room itself was sooo small compared to what I had imagined. It just felt like I should turn around and walk out because nothing was wrong with me, if that makes sense. It psyched me out to see the little baby warmer and the baby nurse prepping everything - I remember thinking, "holy cow, MY baby will be in there so soon, whatttt!?" But then the nurses swarmed with the warm blankets and Jenna waved and they did the spinal and before I knew it I was on my back, rapidly losing feeling from the ribs down. The spinal worked SO FAST! Wayyy faster than an epidural. The tinglies/numbing started literally RIGHT away. They put up the blue curtain and I gave the nurses instructions to watch Austin since he gets queasy, and then I lay there sort of pretending I wasn't nervous but really feeling like hyperventilating. The anesthesiologist stayed by my head the whole time, across from Austin, making sure I felt okay, and Austin and I sort of kept up a conversation because we were both nervous (I have no idea what we talked about, it would probably be comical to listen to that conversation) while they started the c-section.

I could feel pressure, like everyone says, but not pain or even anything uncomfortable. I tried not to pay attention to it because it was kind of nerve-wrecking knowing that they were, you know, using sharp things and messing around with my insides, so I tried to just look at Austin and listen to the anesthesiologist and hope that it would be over soon. I felt like my hearing wasn't quite working right - kind of like I was in a little bubble and it took longer for words and sounds to reach my ears. I also felt like my voice was smaller too. Kind of weird. The thing that surprised me most was how CALM I felt. I definitely had a panicked thought here and there, but mostly I just felt calm and quiet and relaxed.

Then, all of a sudden, we heard a baby cry and Fiala says, "Oh, Jack, it's not that bad!" so we knew it was a boy. Ta daaaa! (We had told her the names we had picked out for boy/girl.) I couldn't believe that he was already here! All I did was lay down! Austin says he looked at the clock when they started and it said 9:18, and Jack was born at 9:21...it was SO FAST. So fast. And then the rest of it went quickly too, especially because I was focused on seeing the baby and listening to the nurses talk about him and feeling so relaxed. I hardly noticed that the surgery was still going on. Jack was our loudest baby yet; he came out shrieking! "WHY WOULD YOU TAKE ME OUT OF THIS WARM, COZY WOMB, GUYS?!?!" He had some liquid in his lungs that they sucked out and soon after his breathing was fine. I just couldn't believe that he was here, and it all happened so fast. I had 12 hour labors with both Natalie and Stockton, so this felt like a walk in the park. 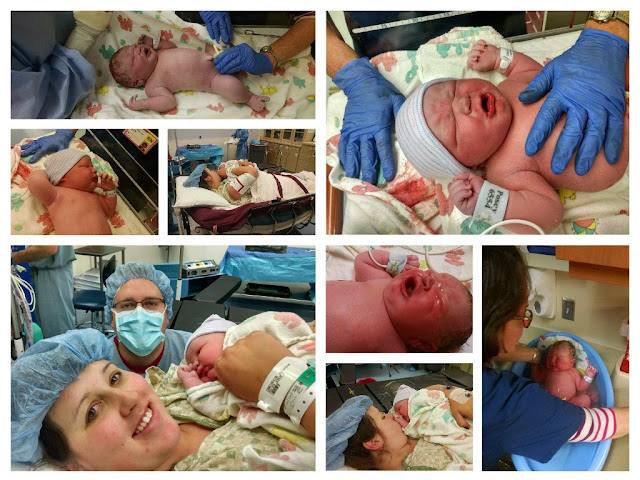 Jenna finished, and they rolled me into the recovery room next door while Austin went with the baby to the nursery to bathe him and make sure everything was cool. My job was just to lay there and it felt so nice. More warm blankets, a nice nurse who answered my questions but didn't bug me, and knowing my little baby BOY was here and I made it through the c-section without a huge production. I was so calm - it was probably the most relaxed I've ever felt in my entire life! I remember feeling a sense of calm after I had the other babies too, but it was different because I could still move and I was breastfeeding already and they had me get up and go to the bathroom, etc. This time I literally couldn't move except for my arms and head, so I had lots of alone time to gather my thoughts and be grateful and just relax. It was like a sedated giddy, if that makes sense: super happy, but very calm about it.

Eventually they moved me to my new room and I requested my handy dandy water bottle ASAP (probably the second greatest thing about having a baby, those wonderful giant water pitchers with the bendy straw and little ice cubes). I spent most of the rest of the day laying there, holding Little Jack and being with Austin. They let me eat almost as soon as I got to the room, which surprised me, but it might have been the most delicious PBandJ I have ever had.

The nurses had me try to stand up and sit down in the chair right next to the bed, and I must have been crazy thinking that everything was fine because when I stood up it was definitely the worst pain I have ever been in in my LIFE. I couldn't stand up straight because it felt like my whole lower abdomen was going to fall out in this big burning mess of searing pain or something, gosh. I didn't know how to handle it and felt panicky, like "oh my gosh how am I ever going to move again?" But after I calmed down in the chair and was more prepared for what the pain would feel like once I stood up again, I got back in bed without incident and it was never close to being that painful again. But YIKES, that was awful.

The night went well, I was scared of getting out of bed again so I had them keep the catheter in as long as possible (tmi?), and didn't have to get up until they took it out in the morning. I fed the baby, and then went to the bathroom. It felt so weird to walk, like I had to walk so gingerly so that I wouldn't hurt my incision area too bad, but if I walked too lightly it hurt too...it was weird. But I made it to the bathroom (probably 8 steps) and then walked around the bed to sit in the chair to have my breakfast (probably 15 steps), and by that point I was weak and drained of all my energy. Breakfast helped a little, and then they asked if I wanted to shower, which of course I did because who knows what I smelled/looked like at that point. It was a mistake to do so much in such a short amount of time though, because once I got back into the bathroom I was dizzy and light-headed and felt like I was going to pass out for a reallllly long time. Thank goodness Austin was with me - he just kept the water running over me and made sure I was okay, but it took all my strength not to pass out. It was scary.

After that though, things really were totally fine, and I was able to get up and move around a bit more each time I tried, and there was always someone with me those first two days so I could always ask for help. I didn't even change Jack's diaper until the third day, ha. Coughing hurt, I had to have help putting my pants on (for like five days, lol), and I ran out of energy super fast, but other than that it really was very manageable. Certainly better than I imagined. Now it's almost been three weeks and I still don't move very fast or push myself very hard, but I feel good and functional and so much better than I expected, which continues to be a relief.

Stay tuned for all the actual BABY details - I just wanted to make sure I remembered this part of the experience too.
Posted by Jessie and Austin at 9:21 PM