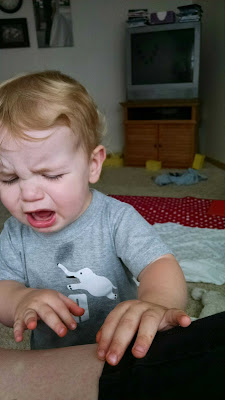 That's pretty much every outing we take, nowadays. We always congratulate ourselves as we head out the door, and then when we come home we're like "why did we go out." Ha, it's not that bad, but Stockton is a RUNNER and it is so hard to keep him contained! He just books it as fast as he can (which is actually reeeeally fast) as soon as his feet touch the ground. He doesn't like being held when he knows he could be running, and I can only keep him happy in the cart or stroller for a little while before the wanderlust sets in again. So basically our outings when I have Austin with me consist of one of us doing the actual errand/shopping and the other one following Stockton wherever he wants to go. I've taught Natalie to just chase Stockton when he's running, so at least they stay together and aren't going in two different directions. Yesterday in Target Austin took Natalie to the bathroom and I put Stockton down for ONE SECOND to just set Jack's carseat in the cart, but our little buddy was off to the races and had already gone so far that I didn't know what direction to start looking for him. It was a little panicky, but I trusted Target and knew that he was just running down an aisle somewhere. I asked a few people "have you seen a little blonde boy running by?" and eventually with some help the team in red corralled him into the frozen foods aisle and I grabbed him. It was probably comical to those watching.

Our outings when it's just me with the kids have slowed down to a trickle - we used to go somewhere every morning, but after a couple train wreck incidents this last week (almost falling out of the cart, getting lost, trying to go down an escalator, etc) I've realized that it's not really safe to go out in public with the three babes by myself. I've been doing grocery shopping when Austin can come with me, or I'll go after work and just take Natalie or Jack (or, once in a rare while, GO BY MYSELF!). We don't really go to the park anymore because I spend the entire time chasing Stockton away from the street or following him far down the sidewalk while others watch Natalie and Jack, but we have been doing a LOT of backyard time to make up for it. Luckily, we have a happy backyard and the kids enjoy romping around, so at least there's that. I just need to get used to being more home-bound right now and keep reminding myself that eventually we will be able to do more things. (Except by that point Jack will be in the running stage, and we'll have to start all over again lol.) The joys of having three wee children! 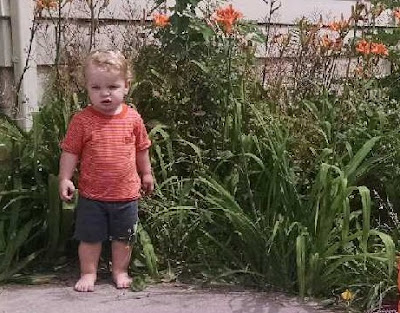 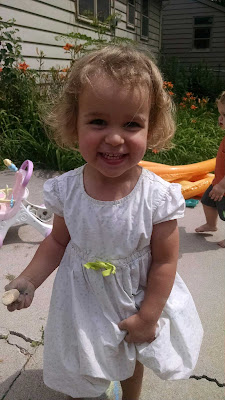 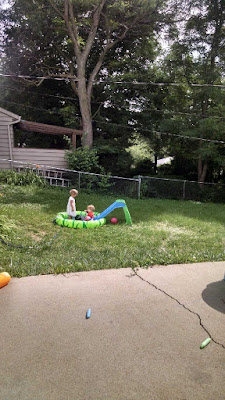 One outing that is usually successful is going to the mall after we drop Austin off at work in the mornings. The shops are closed til 10 so except for that darn escalator, there's no trouble that the kids can really get into. It's great for Stockton because he can run free without anyone telling him where to go or what to do. He is passionate about switching directions at will, so he runs one way for a while and then when fancy strikes (which is often) he just turns around and tries a new vector. He is gleeful about running free, so I love the mall for that. It doesn't feel good to constantly be corralling him a certain direction or stopping him from going that way, so it's a relief to let him go where he wants to go. And, like I said, Natalie knows to just follow wherever Stockton goes, and has a fun time keeping up with all his direction switches. 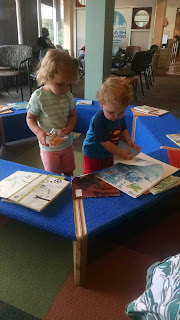 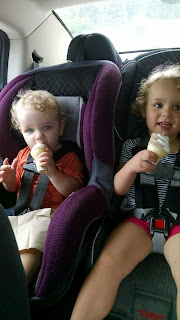 a magical office with a wondrous enclosed circle, and an ice cream date!