Randomly one Tuesday night we decided it was time to go mini golfing. We snagged Grandma (and Great-Grandpa Winterton who was visiting) to come babysit and grabbed Ross and Aly and headed to good ol' Adventure Golf Center, home of our very first date over four years ago!

We had some issues getting there, ha: the golf place only takes cash and none of us had any, so we stopped by a random ATM but Austin's new debit card wasn't activated yet so we had to pause to call the 1-800 number, then Ross pulled forward so Austin could reach the ATM but it was too far from his window so he had to open the door, but the piping on the top of the car between the body and the door started coming off so Austin panicked, and meanwhile Aly was really hungry but we decided to wait until after to get a snack. It was silly and funny and we were already having a memorable night before we even got to our activity! 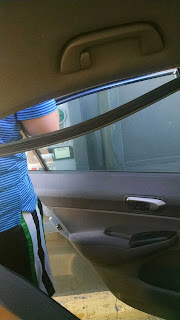 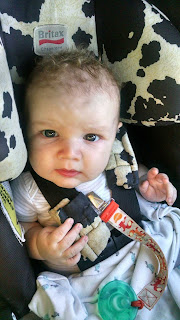 At the ATM with the falling lining, ha, and Jack being patient

Finally we got there and had a blast! Jack fell asleep halfway through the course so I ended up just holding him and watching the game most of the time, which was still super fun. Austin gave each of us sports names: Rosselcopter, Pregnado, Lard, and J-Pizzle, which added to the silliness of the evening. (And Austin's RIDICULOUS too-small bucket hat that he claims was necessary...) 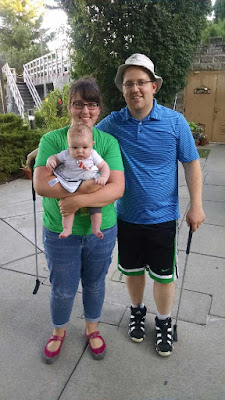 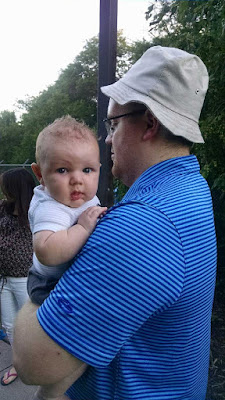 After mini-golf we decided the night was still young, so we grabbed strawberries, yogurt, and a rotisserie chicken to snack on while we played several rounds of Monopoly Deal. What a game! I think I'm the reigning champ, but I bet Austin would disagree : )