We had our first major accident the other day - we had managed to avoid weird sicknesses and big medical issues, but it finally happened. Luckily I think it has a happy ending: 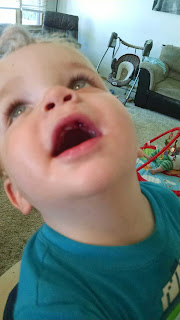 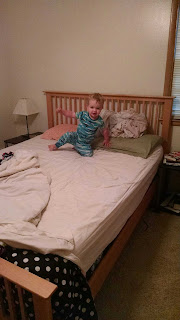 see!? no tooth! but now over a week later we can see the bottom of the tooth, so the gums are pushing it back out...so weird. also, our bed, for accident reference.

Natalie and Stockton were jumping on my bed, and Natalie was pushing Stockton over and they were both laughing. I told her to stop and/or be careful, but when I left the room to go get a diaper I heard a very audible BONK and instant screaming from Stockton. I ran back in there to find blood on the sheets at the end of the bed, Stockton trying to stand up and crying super hard, and Natalie hovering behind him looking anxious. She must have pushed him so he fell face-first onto the end of our bed which is wooden, but the covers were folded over it so it was slightly padded. I panicked because I thought his front teeth had completely shifted, but when I got a closer look I realized the only thing wrong was a missing front tooth. WHAT!? I called Austin since he had just barely gotten to work and he came quickly home, and we called our handy dandy dentist friend Colt and asked what to do. He said that either the tooth was knocked out, or it got pushed back up into the gums. WHAT!? Apparently that's a thing, and it seems like that's what happened to Stockton. The tooth will either come back down or it got rammed so hard that it embedded into the bone, in which case he'll have to get it pulled.

It was scary to feel like we were in an emergency but not quite know what to do, especially since Stockton can't tell us what's going on except to cry, and you're not supposed to lose a tooth at not even 2 years old! I'm thankful for prayers and Austin's work for letting him come home and Colt for being our wisdom. Stockty was sort of whimpery the rest of the day, but he was a trooper and was mostly content with a bink and some tylenol. 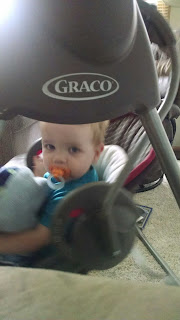 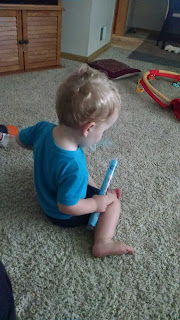 He sat in Jack's swing for a long time to calm down, and played with this bubble wand literally the entire day. It broke just before bedtime and he was not happy.

Other than that, it's mostly been business as usual. 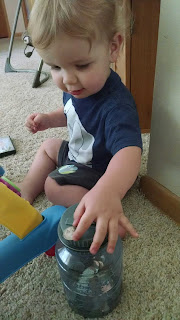 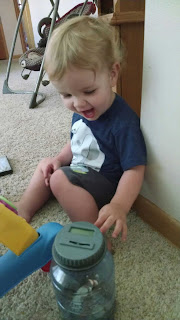 a favorite activity one afternoon: shoving coins into the coin jar

Sorry Little Buddy. You might be doomed to a gappy smile for a while. Luckily you're cute no matter what!
Posted by Jessie and Austin at 10:06 PM