OUR story, part one

Preface: Max, my missionary brother who is almost done!!!, emailed me last week asking about how Austin and I got together and I thought I'd share it here for posterity:

(Also, Austin and I laugh about how we must have been so obnoxious telling every detail of our story to everyone who asked about it when we were first married, so we've since truncated that version to a short and sweet paragraph, BUT this is our blog and what better place to write down every detail now?!)

The Austin/Jessie story, you ask? I was so lost in my own thoughts/experiences during that crazy time that I forget to wonder how everyone else felt about it. I guess with all the craziness you probably didn't get most of the facts/feelings of the whole thing, and I guess now is as good a time as any! It's actually kind of hard to talk about because it was a very spiritual, reverent, unusual experience and it's hard to explain to most people and have them understand about how revelation/the Holy Ghost/faith work together to guide our lives, so that's why a lot of people don't know the whole story.

I'll try to keep it "short" buuuut I might get a little carried away...

I had just gotten out of a serious relationship and was pretty depressed but felt like it was the right decision because he couldn't marry me in the temple and that was not going to work for me, so I trusted in the Lord and moved forward. About six weeks after that I met Austin in an institute class - I knew his dad, Brother Poulsen, really well from almost two years of attending institute and working closely with him for callings, etc. I knew he had a son coming home from a mission, but other than my married classmates teasing me about how I should get with this guy since I was the only single person in the class, I didn't think much of it.

We joked around with the class that first day (early April), making pretend plans to be married in the Winter Quarters Temple and asking which month would work best, but not really saying anything important. I think I saw him a couple times after that, but we still hadn't really had a conversation. I was driving to Michigan for a rehearsal for my upcoming Europe trip and he called me, saying he got my number from his dad and would I like to go on a date that weekend (mid-April). I couldn't since I was out of town but I said I'd like to the next weekend, and that was that.

He wasn't in institute the next class, but afterwards I had to talk to his dad about something for church so I came into his office. We chatted about the church stuff, and then as I was about to leave he said that he had heard that I was going on a date that weekend, and I was like har har har well it's your son, obviously, and he was like "well how are you feeling about it?" That question threw me off because I hadn't really thought about how I felt about it, I mean it was just a basic first date and I wasn't taking it seriously and it didn't seem like a big deal. I opened my mouth to say something smart alecky, but then I suddenly felt the warmth of the spirit randomly and so I said, "woah I'm feeling really good about it." I was pretty flustered because it was so unexpected and I didn't want to really think about it, so I left and pushed it from my mind.

After the following institute class two days later I went to his office again to chat (which was a normal occurrence) and after talking about other stuff he again said, "so how are you feeling about your date on Saturday?" and again I felt the rush of the spirit fill my body and it was just so unusual and inexplicable, so I said something about how I didn't really know what to say and he sort of asked again and then, without thinking first, I said, "well I mean I'm going to marry him so I guess I feel pretty good about it." As soon as the words were out of my mouth my hands flew up to cover it, because I couldn't believe what I had just said! I'm sure I turned bright red but even though logically I felt embarrassed, spiritually I felt the confirmation of the Holy Ghost telling me what I said was true, and it was so strong and so powerful that I said, "I know it's weird because it's your son and all and we don't even know each other, but I don't care because I know it's true." We were both sort of stunned and I think I just walked away haha.

It was CRAZY. I walked home slowly in a daze, not really knowing what to do. I was like wowww I must just still be sad that I'm not dating Rob or something and taking it out on this Austin guy by making myself think I'm going to marry him or something. I tried to talk myself out of how I felt for the next two days, thinking about how ridiculous it was that I had just told his DAD that I was going to marry him when I had hardly ever talked to him. But the spirit was there every time I thought about it, and I couldn't shake my certainty.

He picked me up at my dorm that first date (April 23) and opened my door for me, and in my seat there was a plate of brownies - the first time Austin came to institute his dad had texted me earlier that day saying he had a surprise for me, and when I came running into class late and soaking wet since it was raining I said, "well this surprise better be brownies because it was a huge production getting here!" and the surprise turned out to be that Austin was there, and I acted all disappointed that it wasn't brownies. So he remembered that and had a plate of brownies waiting for me on our first date. : )

He took me to Ruby Tuesday ("because I had a coupon") and then mini golfing ("because my mom suggested it") and then we were having a good time and didn't want it to be over so we went to Ivanna Cone in the haymarket and would have continued hanging out but I had to go to work and he had something else to do too. The date went really well - I felt like I was talking to him like I'd talk to Ananda or someone in my family, it was really smooth and funny and not awkward and easy. We talked about favorite books, made plans to run a marathon some day, and I told him he needed to work on being sympathetic. It totally felt right and I was still flabbergasted that I really knew that I was going to marry him, but I couldn't deny it and after he dropped me off I went upstairs where my roommates were waiting to interrogate me, haha. They knew how I had felt going into the date so they were verrrry curious how the date went, obviously. I told them that I knew it was crazy but that yes, I knew I was supposed to marry this guy. It was so hard to explain (my roommates weren't members of my church) but the spirit kept confirming it to me over and over and I knew I had to be honest.

Later that night Hannah came into my room after things had calmed down and asked how I was feeling, which was a little unusual because out of the four of us we were probably the least close, but I appreciated her asking and said that it just felt like a "duh" that I was supposed to be with him even though it was confusing and unexpected, so she wrote "DUH" on a post it note and put it on my wall. I still have that post it note in my scriptures. 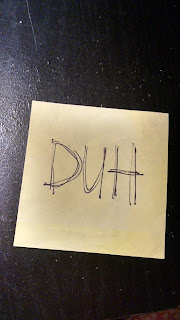 note: I obviously was not crazy enough to tell Austin that I had had this miraculous revelation that we were going to get married - I figured he would get totally freaked out and think I was this crazy Mormon girl and run away as fast as he could, so I definitely played it cool that first date, although we did sort of talk about it the next date. Which happened to be the next day.

STAY TUNED!
Posted by Jessie and Austin at 10:22 PM