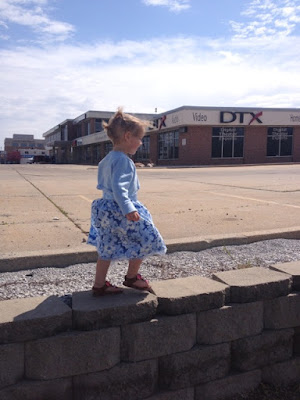 Isn't she pretty? We walked to church one Sunday when Austin stayed home with sick boys. She loves to walk on walls. She loves her pretty dresses. She doesn't really care about her hair (yet?) - I'm almost always the one to initiate but she usually goes along with it. She is BUSY - she doesn't like to sit still, and she doesn't like being alone. She is independent, but she likes someone (usually me) to come be independent with her. "Mom, wanna go make beds downstairs and take a rest?" "Mom, let's go outside." "Mommy, come on!" 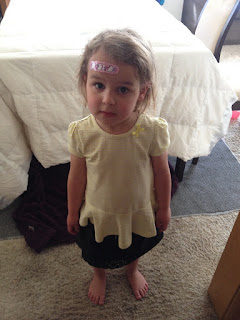 She told me she had to "put a bandaid on her brain" after she bonked it coming out of the fort. She left it on there for quite a while haha. She is stubborn! She gets an idea in her head and unless you have an extremely compelling argument, she will not let it go. 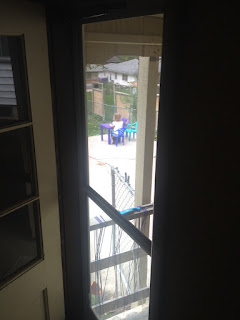 Like I said, she loves doing things with another person, but sometimes I'm doing something else and can't come right then. Lately it's been worse - it seems like I'm always finishing up an email or dinner or tidying or on the phone during quiet time, trying to get stuff done while the boys are asleep because otherwise they won't get done, and Natalie wants and needs my attention but I haven't been able to give her enough. One day after she continually asked me to stop what I was doing and get her a bowl of cut up strawberries I finally went into the kitchen and did it (I'm not even sure what I was doing...making cookies or something?) and then she wanted me to come eat it with her outside. I told her I needed to finish what I was doing, so she got herself a fork and went outside. I didn't really notice until I glanced out the back door, and seeing her sitting by herself at the table casually enjoying the sunny afternoon with a happy snack alone made me feel absolutely awful. Looking at this picture now, even weeks later, makes me tear up because it was a moment of personal failure in my mothering. I didn't think I was neglecting her, I thought I was doing something else that was necessary (which it may have been), but too many moments like this really added up and I just knew I wasn't doing enough for her. SO, despite my reservations, I went ahead and signed her up for preschool in the fall. She needs more activities and more interaction than I'm able to give her. This is a good example of how I'm struggling to find balance in all areas of my life, and how needful it is to focus on "good, better, best." 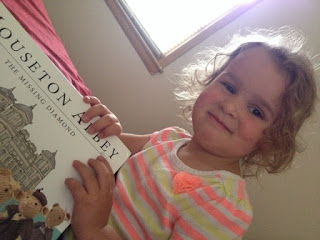 Some days though I do feel like I'm doing enough. We read books and play with dollhouses. We blow bubbles and eat snacks on the steps outside. We quote our favorite lines from movies. (Right now it's "Anytiiime!" from Barbie Swan Princess, ha. I doubt I'll even remember that later.) 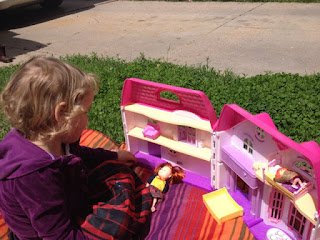 Natalie's favorite thing lately is Snow Globe Stories. I'm not sure how it started, but one time we told her a made-up story of someone stuck in a snow globe, and since then she's asked for snow globe stories frequently, especially in the car or before bed. They can be anything, as long as a snow globe is involved. Usually it's about someone or something that is in a snow globe. One of our favorites is about Belch the whale who burped his way out of trouble but created so many air bubbles that his snow globe burst. We even combined two Natalie classics by telling a snow globe story about Bart the Bat. I wonder how long she'll ask for these stories.

Lately she's also been making up songs, too. Yesterday I told her Renetta's kids were sick and the whole time in the car when we were out and about she was singing about how she wanted Will and Mabel to feel better and how Renetta is helping them. The "songs" are basically tuneless but they are long and she is committed to them haha. 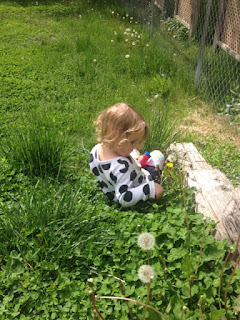 She loves being outside. She loves playing with friends. She doesn't let Austin leave in the morning without giving him a big hug. She only wants me to help her if she needs something in the middle of the night, which is annoying because I don't always want to be the one to get out of bed.

There's so much more I could say about her - she's curious and perceptive and energetic and sometimes generous, sometimes selfish. She's sensitive and caring and loves her family and loves changing her outfits and being cozy. We love you Natsby - here's to the last few months of you being 3!
Posted by Jessie and Austin at 2:36 PM