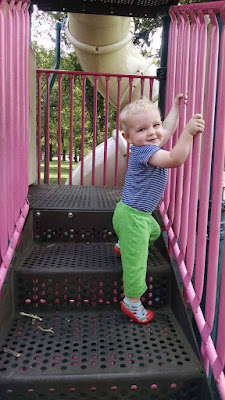 Precious Little Jack! We can't get enough of this boy. If I could only describe him in one word it would be: ENTHUSIASTIC. He loves life and feels emotions with his whole body. I haven't been able to capture it in a picture but when he gets excited about something (sees a dog, finds a good toy, has a delicious bite) he clenches his fists and his whole body gets rigid, toes curled, and he makes an excited squeal/grunt. He must do this like 12 times a day. 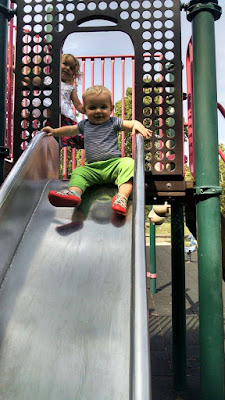 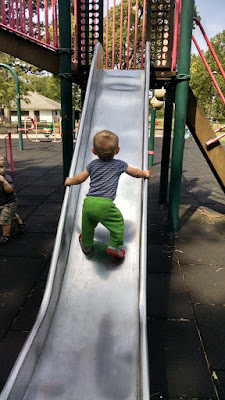 He is hands-down the biggest climber out of the three kids. He is always trying to get on top of things, go up things, find his way into things. He loves things! He points very aggressively when he wants something, LOVES to read (which of course we love) (especially "No, David!"), could live off of fruit, and LOVES giving hugs. He points to the person he wants to hug, says something that vaguely sounds like "hug," and looks at me for approval. I say, "go hug ______!" and he takes off and gives the biggest, squeeziest, arms-around-the-neckiest hug to the lucky recipient. He even uses his knees and toes to hug, cute boy. 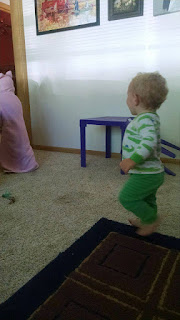 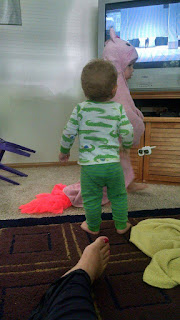 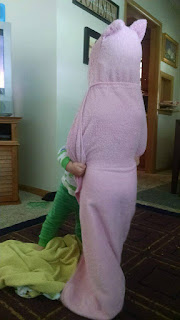 In pursuit of his decided hug-victim: Cat Stockton, fresh from the bath. He followed him around like that for like two whole minutes haha til he finally got the hug he was looking for. 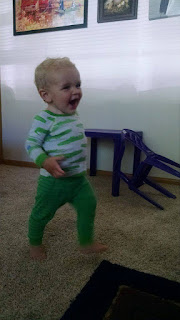 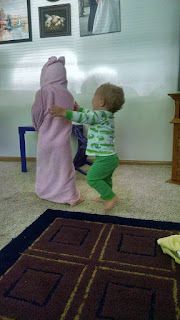 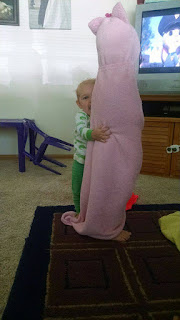 Jack has held on to his morning nap MONTHS longer than the other kids - they were down to just an afternoon nap by the time they were one, and Jack is almost 18 months and still naps twice a day usually. If he doesn't nap in the morning he is sooooo tired by the afternoon - I've found him passed out around the house multiple times. 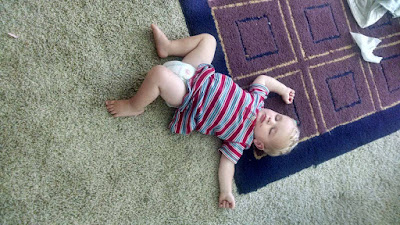 He can communicate surprisingly well with gestures, eye contact, and words that are mostly variations on the "ba!" sound. It takes a trained ear to tell the difference between "ba" ("milk") and "ba!" (bite). He "says": bubble, hug, milk, bite, mama, ball, book, david, elmo, all done, clap, wave, PopPop, stockton, outside, car, up, water, and lots more. It is really really fun to experience his development and growth - Stockton was on his own developmental path and we kind of forgot what the "normal" toddler is able to do with communication, so we are continually surprised and delighted with all of Jack's social skills. 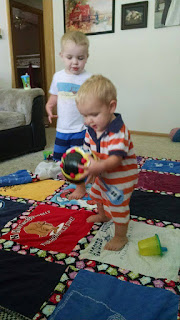 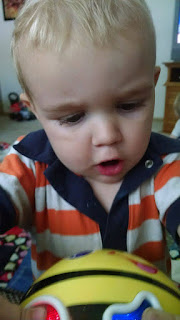 a good example of his enthusiasm and curiosity: "ahh! woah! this toy is so cool! look what it can do! ahh!"

He is still definitely a mama's boy, but in the past few weeks he's been a little less clingy. He still cries with babysitters and acts all betrayed if - heaven forbid - I can't pick him up the instant he demands it, promptly flopping himself down on the floor with dramatic flair. He still loves his blankie and bink.
He is still more on the "petite" side which we love - it makes him feel really little still and just so darling. Smalls is such a perfect addition to our family!
Posted by Jessie and Austin at 8:42 PM