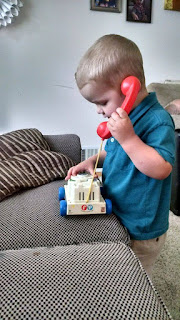 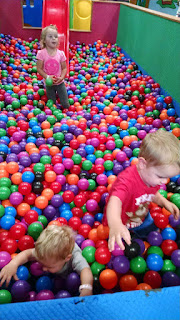 Three years of STOCKTY. This boy has given us so much joy and love. He was such a chill baby and still maintains a lot of that composure, playing contentedly for a long time without being interrupted. If you try to force him to do something, however, prepare for your doom. It is near impossible to get that boy to do something if he doesn't want to. Example: putting on shoes. The worst. 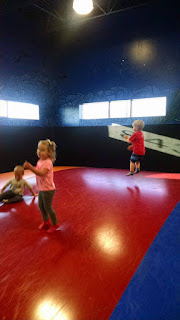 Last year we went to Lost in Fun on his birthday, so we decided to stick with tradition and go again. Family met us there, along with the Birdsalls, and it was a great time. It was especially fun to see Jack having such a good time since he's always been too little to really enjoy the place until now (we haven't been since before he was one). The bouncing pillow was a hit, as always, as was the ball pit and bubbles. Letting kids roam free, doing as they please, taking their time or rushing from thing to thing...it's the best. I love giving them the opportunity to explore and choose their play. I wish we had more of an outdoorsy area to let them do that - I think we need to do a better job getting our children in the wilderness! But I digress... 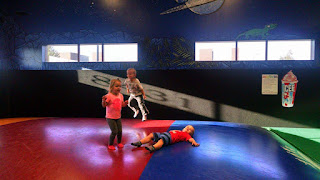 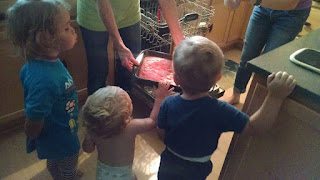 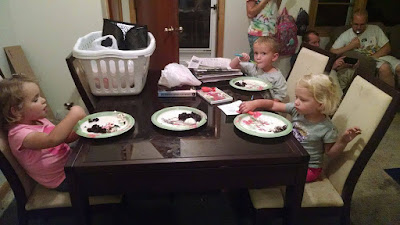 Eating the lava cake I made in the crock pot. I had been in Omaha earlier that day until 1:30, and we were planning on leaving the house at 4:30 for festivities. Hence - barely enough time to make our favorite homemade cake, even if I had energy, which I did not, so I went to backup plans A, B, and C. "A" was to bag cake altogether, citing "too many desserts lately" and "no one will care" if we don't have cake. Then I went to plan "B" because I realized it was lame not to have some sort of treat on your birthday so I decided that since we were already going to have dinner at Chik-fil-a we could have ice cream cones there too, calling it good on the birthday treat plan. Then I realized that was still pretty lame since birthdays only happen once a year and cake is the appropriate and assigned dessert, and if people were coming over after Lost in Fun it would be lame not to have cake to go with presents, so I went to Plan "C": Cake, but easier. I remembered a gooey yummy chocolately Lava Cake that we had at a friend's house once, and remembered that it was made in the efficient and quick crock pot, so after a quick google search I had a recipe saved and went to mixing the ingredients. It took a total of six minutes (since pudding is involved, taking up three of those minutes), and voila! Lava cake. Delicious and easy. 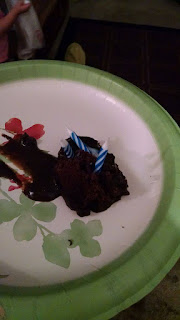 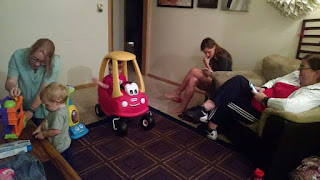 Jack with Makall, Stockton in his new car (Natalie calls it Kobe after a new boy in her class randomly haha), Annie and Mimi on their phones. I love when we're all cozily gathered, relaxing together. 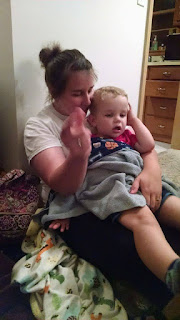 The only picture I got with him! 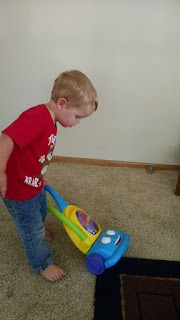 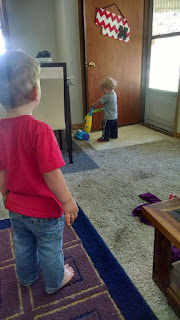 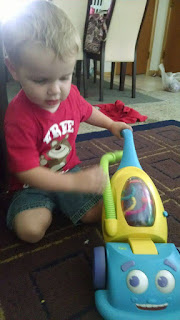 GOODWILL FOR THE WIN: the church nursery has this vacuum and Stockton always insists on playing with it (sorry, other kids) so I've been on the lookout for it for a while and magically it appeared at Goodwill for the grand total of $.99 the weekend before his birthday! He was so happy, and generously allowed Jack to have a few moments with it before he took it back.

In Natalie's exuberant shadow and as a non-verbal boy for so long, Stockton has often been sort of overlooked in general. His easy manner and I'm-fine-playing-on-my-own-thank-you demeanor made it hard for most people to connect with him at first. Let me tell you though: this boy is happy and loving and silly and opinionated and generous. It has been incredibly satisfying to be able to help him learn more communication and allow him to connect with the world around him in more accessible ways this past year. He is an integral part of what makes us Poulsens tick, and we are so grateful for him. 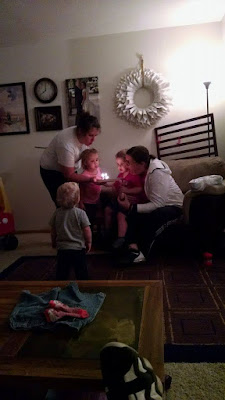 Cake and candles. Happy and THREE.

Posted by Jessie and Austin at 8:33 PM