Have you ever done something awesome that benefits a ton of people, but nobody really notices or gives you credit? I hope not, because it's a pretty crummy feeling. But if you, like me, have felt that feeling, then I hereby dedicate this post to you.

1. Guy in Facebook Comments Section Who Summarizes an Article so You Don't Have to Read It.

One of the worst things about social media is that it's become more and more about number of page views. If a certain article generates a certain number of views, they get paid more in advertising dollars, which makes sense, I guess. But what I hate about it is the stupid 'clickbait' article titles you see everywhere. You know what I'm talking about: "You won't believe what Lebron James said about former teammate Chris Bosh!" Then you click on the article, hoping to hear some really juicy gossip that'll put a dent in Bosh's sterling reputation, but you find out that the only thing Lebron actually said was, "He's a great teammate." Now you've wasted thirty precious seconds of your life.

That's why Guy in Facebook Comments Section Who Summarizes an Article so You Don't Have to Read It has become one of my favorite people in the world. I can just click on the comments and find out that the article sucks and isn't worth my time, and I don't give the original poster the satisfaction of more pageviews!

So if you, dear reader, are one of these people, I thank you. You deserve more credit.

2. The Inventor of Barbecue Sauce.

Apparently, the history of barbecue sauce is very long and much-disputed (some even credit the Chinese for this obviously-American delicacy!), but the earliest written recipe I could find through my extensive research was the recipe of Mrs. Edith Lockwood Danielson Howard in 1913. She lived in Providence, Rhode Island. By all accounts, the name Edith Lockwood Danielson Howard should be a household name, considering her extensive contributions to American society, but somehow it is not a household name!


3. Kid in My Chemistry Class Who Consistently Gets Less than 7% on Exams and Brings the Average Down for the Rest of Us.

I'm convinced that there are some robots in my chemistry class. One girl (or robot?) who sits behind me got 103% on the first two tests, and was upset with herself for only getting 100% on the third one. Anyways, people like that are definitely NOT unsung heroes. In fact, they make the rest of us feel dumb! The real unsung hero in my class is the kid who got 5% on the first exam, 6% on the second and third exams, and 5% on the fourth exam. He brings the averages way down so that people like me (with a ~75% average on exams) can feel like we are actually doing okay. Bless his soul. 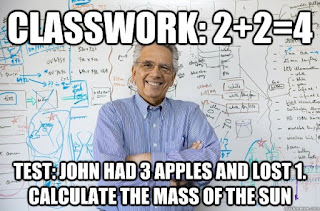 Yes, I am referring to the object that unplugs clogged toilets. Yes, I agree that it is filthy and disgusting and I want to throw it away after using it only once. But honestly, Plunger is such a trooper. Time after time, he's there for us, literally wading through crap to lend a helping hand. Thank you Plunger, for being so much more than we deserve. 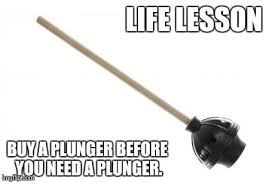 5. The first person who thought of this:

Posted by Jessie and Austin at 4:09 PM