Austin and I did the Whole30 diet in March - you can eat fruit, vegetables, meat, oils, some nuts, and water, and that's about it. No dairy, soy, gluten, wheat, sugar, preservatives, artificial flavors, legumes, etc etc. It's pretty gnarly but it helped me kick start my weight loss and start to feel better about my health lifestyle. We've since started round 2 of the Whole30 (thirty days of this kind of "raw" eating) and some of our family are doing it with us this time, yay! Shout-out to the solidarity of doing it together!

We've found some recipes/foods that really work for us with this kind of diet and I want to post some of them here for future reference and for those who need recommendations (Hi, Afton!!).

*a quick note on "cheating" - cheating is highly looked down upon from the Whole30 creators, but there are a few things that I have allowed myself in order to survive this kind of eating even though they aren't technically allowed: soy sauce, ketchup, Heinz 57, a little splash of milk in my scrambled eggs (round one I didn't add any milk and by the end I couldn't even look at eggs, so this time I'm saying YES for just a splash), and a little butter here and there when needed. Other than that, we stick rigidly to the rules.*

SNACKS/SIDES
pistachios
almonds
cashews
fruit leather - lifesaver when you have a sweet tooth
steamed broccoli or green beans
fruit salad (add squeezed lime juice - it really ups your fruit salad game!)
dried fruit (it's expensive and usually has added sugar so you have to be careful, but once in a while dehydrated apples are a nice snack for a change)
NAKED JUICE (this is my "treat" any time I am craving something delicious.)

POTATOES (we usually dice them pretty small, toss them in olive oil, salt, pepper, onion salt, and garlic salt, roast them in the oven for twenty minutes at 400, then flip them on the pan and put them in for another 10 minutes or so). We eat so many potatoes! Another way we like them is to cut an unpeeled potato into thin slices, coat in olive oil/seasoning, then bake until soft on the inside and almost crispy on the outside. Delicious "potato chips!"

cinnamon apples (Austin made this one up - he dices up apples, sautes them in a little olive oil with cinnamon until they are warm and soft, and this is his "dessert")

Lettuce Wraps - you can omit the cornstarch and serve with diced peppers (makes it sooo delicious). We prefer to use ground chicken instead of diced. I also use less hoisin sauce than it calls for and compensate with a little extra soy sauce.

Potato Pancakes - these are one of our favorite things to make. Omit the flour and make sure they are really flat when you put them in the pan so they cook through. She makes them a lot smaller than we do - maybe next time we'll try making the small ones! We just use a plain cheese grater instead of any fancy attachment, and we found cheesecloth at our local grocery store for super cheap (WAY better than using paper towels, which is what we used to squeeze out the liquid at first).  We eat this with fried eggs on top. MMM.

VINEGAR PORK - this is the easiest, most delicious meal in the entire universe. It couldn't be more simple but it is so incredibly flavorful, it's unbelievable. It's literally just a hunk of pork (last time I used shoulder, I've also used rump roast or a pork loin but any chunk will do really) put into a pan with LOTS of vinegar (I'd say have the liquid come up 3/4 of the way on the pork), rub salt, pepper, and red chili flakes onto the pork, put it into a 250 degree oven for at least 5 hours, turn it a couple of hours into cooking and rub the same stuff on the other side, add more vinegar as it evaporates, and pull it out when you're ready for an amazing dinner. Shred the pork (it is SO tender) and pour the vinegar sauce over everything - you have to have potatoes with this meal because they soak up the juice and it is wonderful. YUM my mouth is watering thinking about this meal.  Oh, and cover the pan in the oven either with its lid or aluminum foil.

AUTUMN SOUP - this is hard to write down because I just eyeball everything, but this is another good meal. Dice up as many potatoes as you want (5 or 6?), then dice up carrots (probably 6?) and celery stalks (3 or 4?). Put all that into a big pot and cover it with water, and add an extra inch of water. Let the veggies soften for about ten minutes, then add browned ground beef seasoned with onion salt and pepper. Add about a teaspoon or so of Kitchen Bouquet - this is a super random cooking liquid that I have never seen for any other recipe, but it's a must. It has a slight flavor to it but mostly it just turns the broth brown. It comes in an ugly brown/yellow bottle and is probably located near the worcestershire sauce at the store, I would guess. Don't skip this ingredient! It's random but mighty! Then add a bunch of dried basil - I probably add at least a tablespoon and a half, probably more. Add tons of salt otherwise it will taste like boring water and vegetables. It is scrumptious with buttered toast, but only when you're not doing Whole30.

Salt and pepper to taste

1. Heat oil in a large stockpot over medium heat. Add garlic and onion and saute for about 5 minutes or until garlic is fragrant and onion is translucent. Add red chili flakes! This adds a delicious spice and robustness. Add undrained tomatoes, broth and vegetable juice. Bring to a boil, reduce heat, and simmer about 10 minutes.

2. Add the basil and remove from heat. Using an immersion blender, blend to until the desired consistency is reached. If you don't have an immersion blender, the soup can be processed in batches in a standard blender. Season to taste with salt and pepper.  (the original recipe calls for cream, but on whole30 we don't add it. An important step that isn't listed here is to pour the blended soup into a strainer with a bowl underneath to filter out the little tomato skins that don't get fully blended - this makes the soup a better texture.) 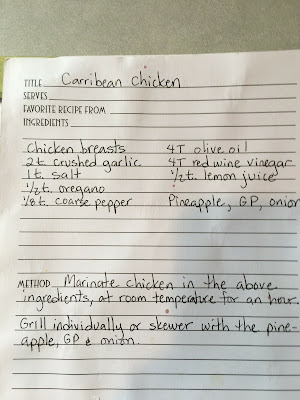 You HAVE to eat this with pineapple. Have to. And the peppers and onions are also amazing with this chicken. It's just as good baked in the oven if you don't want to grill. (Also I don't marinate at room temperature, that's gross.) It's extra delicious with rice when you aren't on Whole30 rules.

As I think of/find more ideas I'll update this post. What has worked for you? The hardest thing about this diet (other than missing carbs/dessert) is it's hard to find any variety...you basically eat the same six things in rotation. It's especially hard for someone like me who doesn't really like meat or fish - Austin can grill up a steak or tilapia fillet every day, but I just don't like it. We've had fun trying new things though and are always looking for more ideas!
Posted by Jessie and Austin at 9:34 PM