Our shower needed new caulking because the old caulking was OLDDDD and even after scrubbing it to death it was still kind of black mold-y and was peel-y and just not appealing to shower with. At all. And the vinyl shower walling wasn't completely glued to the wall, which also disrupted said caulking. (These were inherited issues, by the way. Came with the house.)

(Not pictured: Austin playing with the kids this afternoon so I could start this project!) 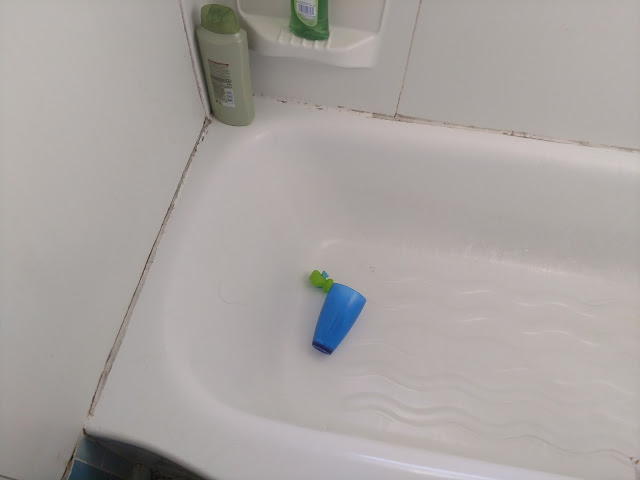 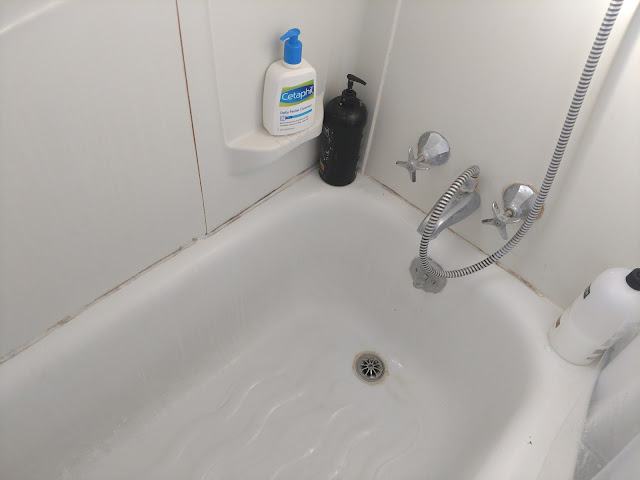 SO! I dived right in, despite my trepidation. I do not consider myself handy in the slightest, but I went to Lowe's and got what I thought I needed and locked myself in the bathroom to get 'er done. I peeled off all the caulking I could without extra help, then sprayed the rest with Goo Gone (I almost didn't buy it, but it was right next to the caulk at Lowe's and I was like hmm, I bet it's there for a reason. It was a lifesaver!) While the Goo was doing it's 2-hour job, I glued the wall panels and felt extremely legit with my very own push-gun. (NO idea what it's actually called but I was thrilled to be able to use it appropriately.) So far, so good! 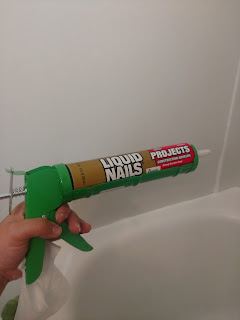 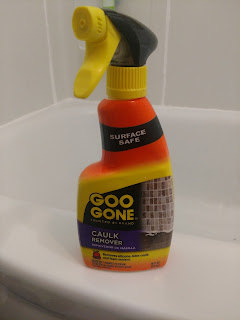 I let the stuff dry and then after I put the kids to bed I jumped back in, excited to see how everything was doing while I was gone. It looked delightful! The glued panels were sticking true and the caulk was sufficiently loosened, so I could scrape it off. My index finger hurts from putting so much pressure down on my tool, over and over again to chisel away at the old caulk! But it was satisfying to see it come off and leave me a clean surface. 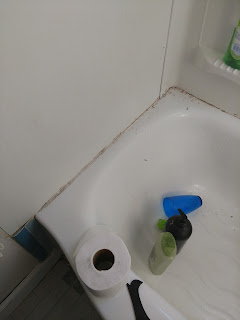 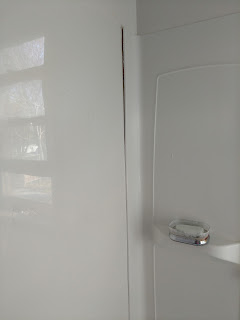 letting the Goo sit; places where the vinyl was coming away from the wall 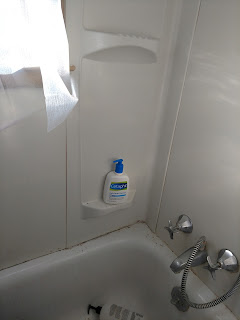 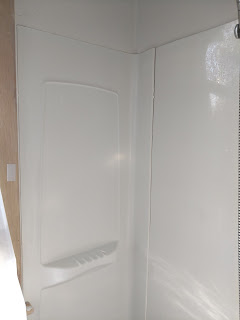 Now, the part that I felt the most unsure about: doing the actual caulking! I took a deep breath and just went for it. We are renting this house and I have pride in it but definitely not as much concern for perfection, if that makes sense. Next time (because now that I have this new skill set, there has to be a next time, right?!) I will definitely be studious beforehand, watching how-to youtube videos and getting a better technique, etc. I have to say, for doing no research and having no experience, I think I managed quite well! 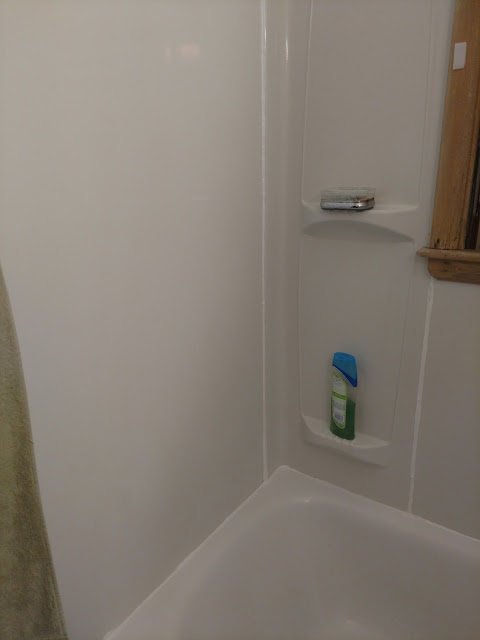 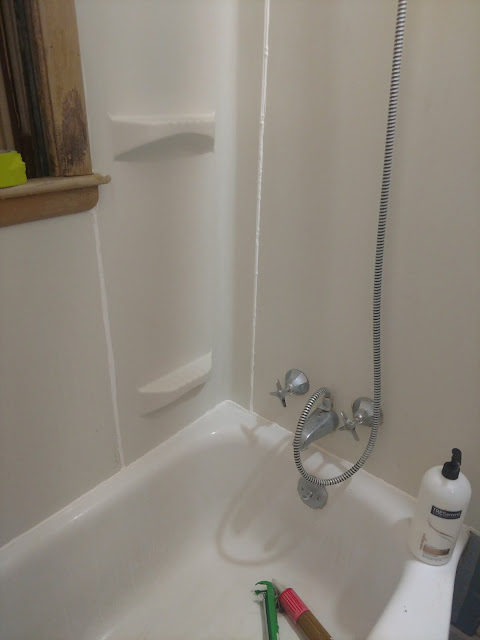 The bottle I bought turned out to literally be exaaaactly the right amount for my bath! I used every last squeeze and it was very satisfying. Ugh, how terrible would that have been if I ran out when I was so close to being done? I'm cringing thinking about it. Austin is at the temple and the kids are asleep so I couldn't even go out and get more if that happened, and tomorrow is Sunday and I'm in Omaha on Monday so I wouldn't even be able to finish until MONDAY NIGHT! Wow, I'm getting all worked up...so glad that it worked out better than this haha. 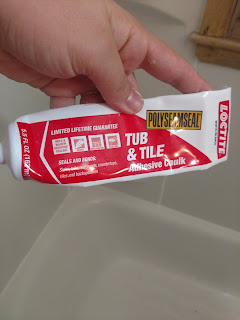 Now everything is "curing," as they say in caulk-speak, and I'm just so proud of myself! The window is open to filter out the cancerous fumes, so the house is a little cold, but I'm cozy in bed and filled with the glow of a job well done. I literally ran right in here to blog my project as soon as I finished! More chores await me now but this needed to be documented immediately.

How about the before/after pictures, one more time?!?!?!? 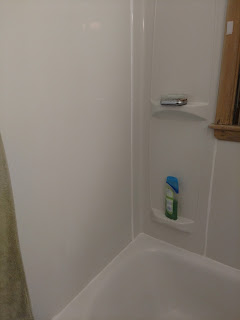 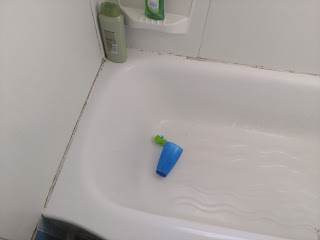 I'm annoyed I didn't take the same shots for a better before/after comparison, but you get the picture. 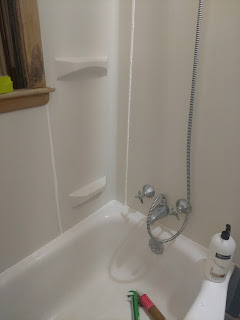 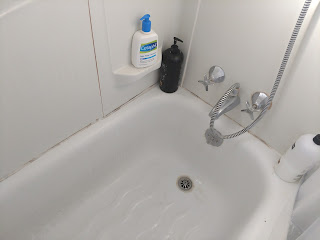 Ahhhh. Sigh of contentment and satisfaction : )

(Note: I'm listening to Appalachian Spring, which I think is quite fitting for my situation tonight. The story of AP is a new couple who start a new life together, build a homestead, exult and pour out their grateful hearts in Simple Gifts, and then peacefully finish their day in their house in the amazing wilderness. .....so me recaulking my bathroom makes me feel similar to them building an entire house, haha.)
Posted by Jessie and Austin at 8:51 PM