When I was a kid, I had asthma. It was very manageable, although I had to go to the doctor several times a year (and even the hospital when I lived in Washington, I think). It got worse when I had a cold and was sometimes exacerbated by exercise, but I don't remember it being a particularly huge deal in my life. I grew out of it before high school and haven't had an inhaler since then, but even now when I get a nasty cold that settles in my chest, the ole asthma flares her clutch on my lungs and I'm fully out of commission. I can't get a full breath, and nothing helps. I basically sit on the couch, wheezing and trying not to do anything for a few days.

That hasn't happened in a few years, thankfully, but the cold that Jack had on Sunday has now settled into a creaky wheeze in his chest and he sounds exactly like I do when I'm having an asthma issue. He was short of breath, breathing shallowly even when he was just sitting down, and not able to get enough air to do a proper lung-clearing cough. I took him to the doctor this afternoon and she didn't really believe me at first (she's not our normal doctor - we took whoever was available for the short notice appointment) but as soon as she listened to his lungs she was like "wow, well you were totally right!" and went to get a breathing treatment. He resisted for the first minute, but then resigned himself to his fate and watched videos on my phone for the rest of the time while I held the mask to his face. She listened to his lungs afterward and said they were a little more clear, but that both lungs still sounded too raspy for her to be comfortable, so she sent us home with the breathing treatment that we are supposed to administer every four hours until we come back in 2 days to get him checked out again. Apparently he has bronchiolitis, which if managed early enough and without further complications should go away in several days. In some cases, especially in babies, it requires hospitalization, but the doctor said she hoped he would respond to the treatments for a few days and then be back to normal. We'll see! He's been in the most cheerful, happy mood today, which is probably why the doctor didn't think anything was wrong. I just did the second treatment while he was asleep in his crib, and it went pretty well. Not looking forward to the 1:30am treatment! Luckily it takes less than 10 minutes, and other than the fact that the machine is pretty loud, it shouldn't wake him up too much. 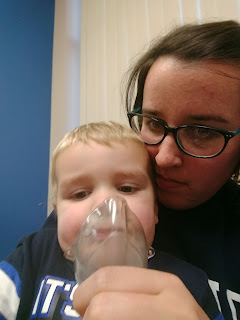 I'm grateful for modern medicine. We have an incredibly healthy family and I do not take that blessing for granted, but in the times that we do need doctors and pharmacies I'm just so grateful we live in this century, and in this country!

I wish health insurance wasn't so expensive, but I am thankful for it. I got fed up with "Obamacare" and the government's healthcare marketplace this year after my insurance went up almost $100 per month (Austin's too), so I looked into other options and remembered my friend telling me about a cost-sharing program called Christian Health Ministries. After doing some research I decided to cancel my Obamacare policy and give this other deal a try! I nevvvvvvver go to the doctor, like never ever, but I know it's important to be insured, so I'm optimistic about this set up. I chose the lowest plan ($45/month!), plus a little extra for the catastrophic option just once a year, and I'm feeling relief about the much more manageable costs.