My mom decided that after hearing about the famous Sandhill Cranes Migration along the North Platte River for the past 12 years living in Nebraska, it was time to go see what all the fuss was about. She got tickets for her and my dad, and then got more for Max and I when we got wind of the plan because obviously we wanted in. She booked us a hotel in Grand Island (about 90 minutes away from Lincoln), and we looked forward to the weekend. 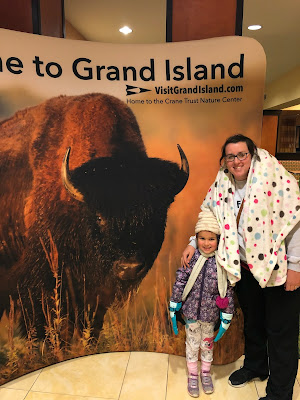 Unfortunately, she had to go to Utah last minute and wasn't back in time to see the cranes after all! There was a little discussion between the remaining three of us if we should still go, but no one backed out so cranes were on again. Grandpa Bim, my dad's dad, suggested that Natalie use the extra ticket since my mom couldn't go. Natalie was thrilled! But then I realized that she would be bored and cold, so we tried to talk her out of it. She wasn't buying it, assuring us that, "no no, I love watching birds!" That girl loves adventures! She was all ready to go when I got home from work, but then my mom texted asking if there was an age requirement. Sure enough, you have to be 12 to go on one of the tours, so we gently told Natalie. She put on a brave face but was really sad, asking, "but why do the big-year-olds get to go and not the little-year-olds?" She cried a little and then got her thinking cap on, suggesting lots of different plans that would still allow her to go on the trip. She figured she could "paint and draw in the room next to where you are watching the cranes" or "just stay in the hotel room and watch TV until you get back." We reminded her that she is 5 and can't stay by herself, and her face lit up and she said all business-like, "oh! Well there are lots of persons going on this trip, maybe one of them can stay in the hotel with me and save their ticket for later!" She was so determined to solve the problem, it was really cute. And it ended up being a good solution - my dad had informally seen the cranes another year, so he offered to stay with Natalie, who was completely thrilled by this turn of events. Hotel room? Extra time with Pop-Pop?! Then, she heard there was a pool, and you would have thought she just won a million dollars for how excited she was. 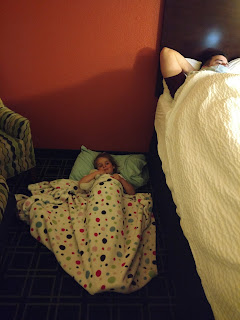 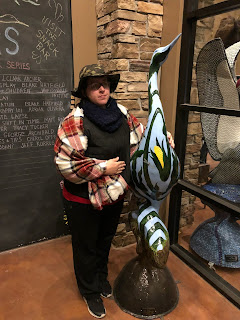 After an awful (lol) sleep in the hotel, Max and I woke up at 5:10 to get our stuff together and layer up for the cold March wind. We met at the Nebraska Crane Trust with the rest of the tour and listened to a little video of why saving the cranes is important and what they have to do to keep the Platte River a good habitat for them. They also asked for donations like 12 times, and gave us some rules of the tour: no loud noises, no flashes, no sticking anything (camera lens, etc) out of the blind, no leaving until the guide says it won't disturb the cranes, and if someone sees the elusive Whooping Crane make sure to tell the group. It was the kind of situation that Max and I would normally mock, but it was really early in the morning and everyone was taking it so seriously that we had to keep most of our comments to ourselves. We got a few good ones in under our breath at least. 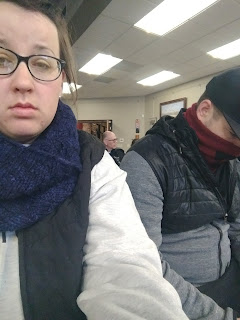 We caravaned a few miles into the wilderness, up to a path leading to the crane blind right next to the Platte. The blind looked like a stretched out shed - it probably fit 15-20 people across looking out, and had a simple bench when you got tired of standing and little viewing windows cut out of the plexiglass. We were grateful for the protection from the elements - it was super windy and cold outside, but we were snug in the shelter. Everyone found a square to look out of, and then we just waited. It was still dark, probably around 6:15 in the morning, and I don't know what anyone else was thinking but I was like.....was this worth it? I couldn't see any birds, so I was afraid they had already left or something. But as the sun came up bit by bit, it illuminated the sand bar across the way in the river, revealing it not as a sand bar but hundreds of cranes! It was so cool! 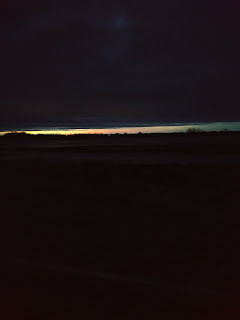 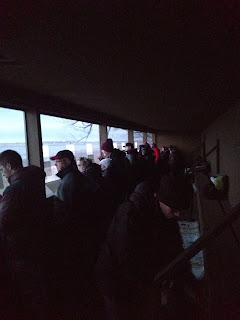 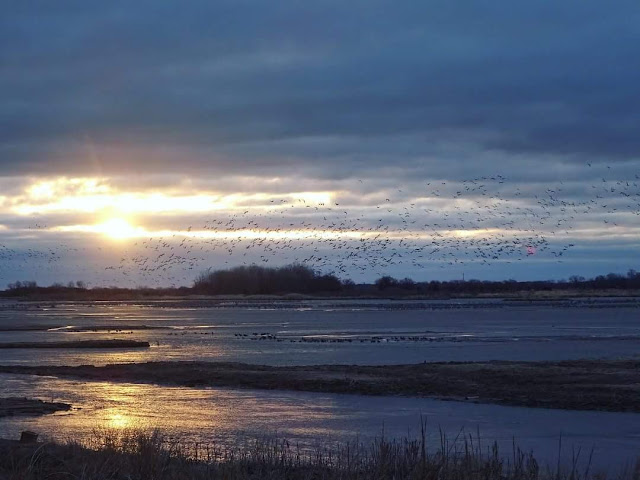 From afar, it really doesn't seem like anything special. But up close with the binoculars, it was amazing! The cranes dance around, cawing at eachother, prancing with their bony stick legs, flapping their wings but not flying away yet. There are just so many of them! 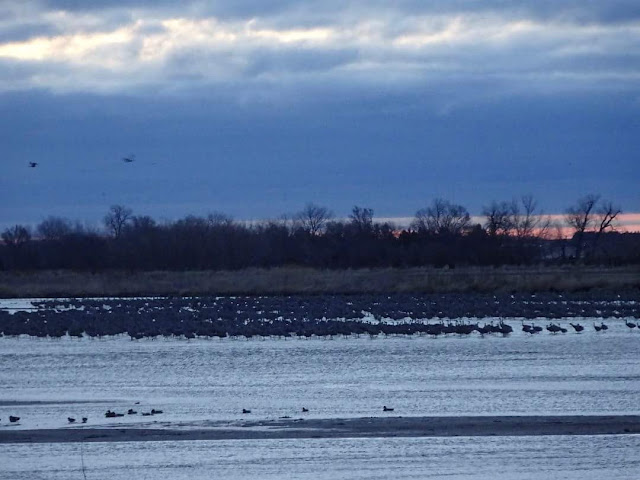 The group was filled with photographers and bird enthusiasts, and then Max and I haha. We definitely stuck out as the random entries, but we were accepted because we appreciated the cranes. We saw different flocks from different parts of the river take off in twos and threes, and then in bigger groups. It was funny to hear the collective gasp of the photographers as the birds took flight en mass and hear their cameras clicking in sync. There really were so many birds! They like the Platte River because it is shallow and sparsely vegetated, so they can eat and rest in safety. They don't like trees and bushes because their predators can hid there, and they feel exposed. The Crane Trust actually tills the river with a giant machine and artificially keeps the banks from growing together, keeping it the way the cranes like it. 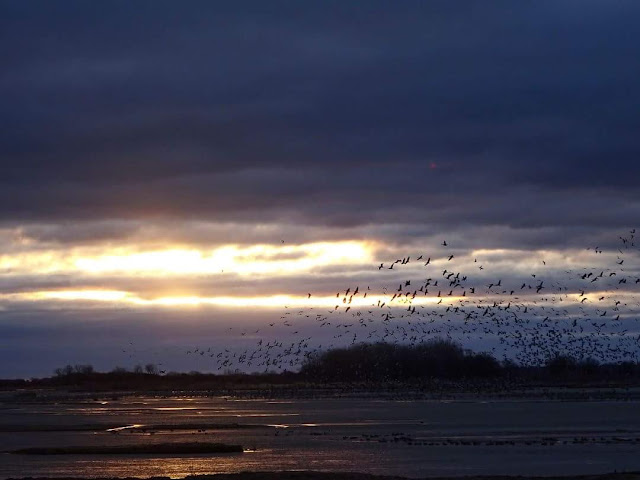 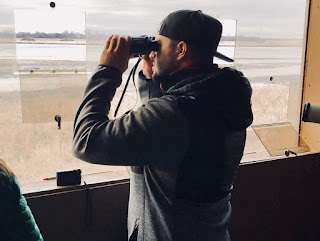 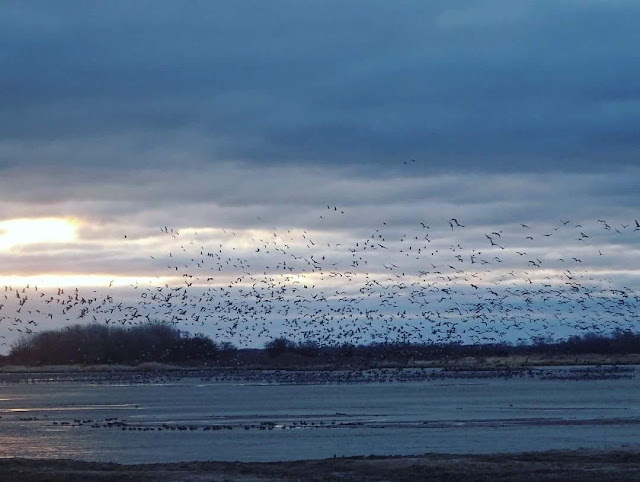 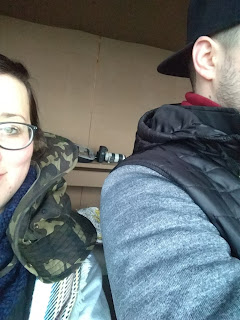 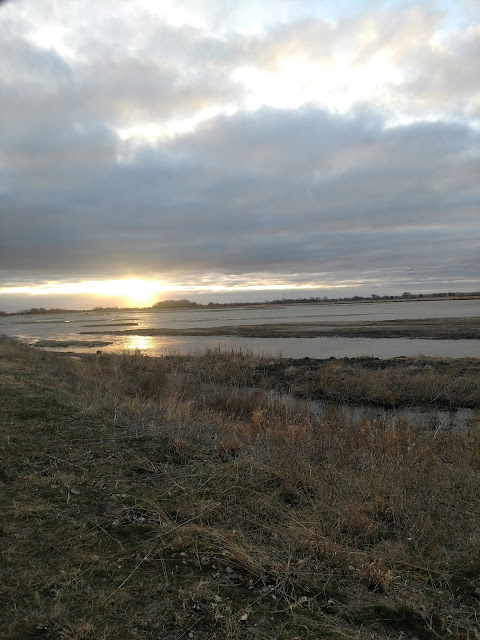 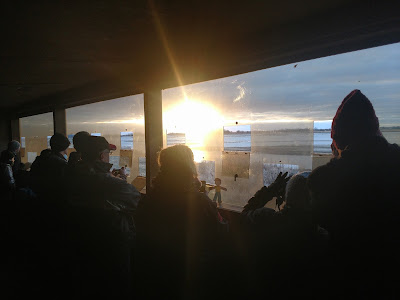 I loved listening to the guides talk in excited whispers together: "did you see the Whooper yesterday?" "do you know what kind of duck that is?" "how's your waterfowl knowledge?" I think anyone who volunteers for a cause that they are passionate about deserves respect, so more power to you, Colleen and Richard!

It was a really cool experience. The cranes were spectacular (especially with the binoculars Max borrowed...they really made a huge difference!) but more than that it just felt good to be in nature and watch the sun rise and feel the fresh air. I love the outdoors and have always felt rejuvenated and invigorated by the wilderness. Thanks to my mom for putting this together! 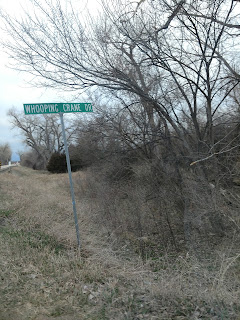 We walked back to our cars in the fierce frigid wind, waving to the seven bison on site, and drove back to the visitor's center where I got a shirt (duh). We called my dad to check in and see if they needed anything, and Natalie answered. "Why are you calling?" I laughed and said we were done and were coming back to the hotel. Fearing that we would be infringing on her pool time (the pool wasn't open yet) she paused for a moment and said, "...can you just go back and watch the birds again?" Hahaha dissed by my five-year-old. We got breakfy at McDonald's and stopped at Walmart to get swimsuits for my dad and Natsby, then I showered and Max napped while they swam. Conscious of the fact that my boys were waiting for me at home, I practically dragged Natalie from the pool so we could get on the road, but she got a good swim in. 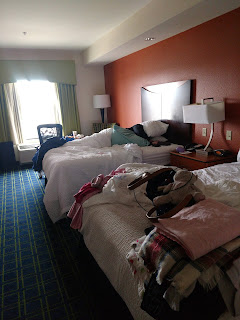 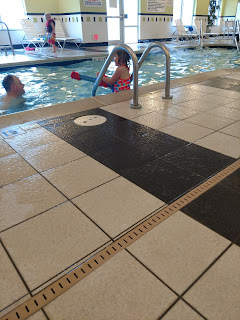 Kudos to my dad for volunteering to miss out on the cranes, being willing to go swimming, and having a good attitude about everything. He basically drove 2.5 hours, paid for tickets that he didn't use, and paid for the hotel just to spend time with his granddaughter. He's amazing that way.
Posted by Jessie and Austin at 8:54 PM