In what is likely an accumulation of happenstance (a stressful week, little sleep, spiritual high, and of course pregnancy) rather than this last *cherry on top, I am sitting on the couch having a dinner of diet coke and belvita crackers, surrounded by the mess that I haven't had time to handle in three days, listening to Natalie cough and Jack play with the tape measure he brought to bed and Stockton open and close the door of his school bus. I'm crying big ugly (hormone) tears that I will try to hide by the time Austin gets home because nothing is actually wrong; just time for the emotions to overflow.

*the cherry on top:

Stockton was frustrated that we couldn't go to the church to "get one toy" tonight. He gets to go to the nursery room and choose one toy on Sundays to help him sit still in primary, and that has translated into taking that toy home and returning it the following week. It was a good system until we had a regional broadcast instead of our normal meetings and didn't exchange the toy that Sunday. Stockton really wanted to "get one toy" the next day, which we thought was reasonable since we had missed the normal routine the day before, so Austin took him to the church on Monday to return one toy and choose another. This didn't seem to be a problem, until all of a sudden instead of waiting for the next Sunday, Stockton wanted to "get one toy" on Tuesday, and Wednesday, and Thursday. By Friday he was becoming so obsessed with this process that we endured a fearsome fit and then banned getting toys at the church unless it was on Sundays. That worked okay again, until yesterday when I needed to go to the church to prepare the ham for the Christmas party later that night. When I told the boys to get in the car, Stockton asked if he could "get one toy," and I thought that was a reasonable request since unbeknownst to him we have Stake Conference this Sunday and won't be going to our ward anyway, so I agreed.

...which was a bad choice. I went to the stake leadership training meeting this afternoon and came home with some good ideas that I wanted to implement in our home, but as soon as I stepped in the door Stockton was adamant that we go "get one toy" at the church, even though we just went yesterday. I tried ignoring him but his requests got more and more belligerent, "get one toy? GET ONE TOY?!" so Austin put him in time out, and that started a dramatic downward spiral for the next hour. Austin left for the adult session of Stake Conference and I put on some nice music to help the house feel calm as I geared up for the rigors of bedtime alone. I helped Natalie and Jack get jammies, letting Stockton calm down in the other room, and then I made the fatal mistake of, heaven forbid, asking Stockton to come brush his teeth with the rest of us. That led to Stockton's toothbrush in the (unflushed) toilet, so I got out the new package of toothbreesh and, thinking that he likes new things and that he likes choices, showed him the 4-pack and asked him to choose his new toothbrush. That led to a fierce protestation involving trying to destroy the package. When he failed and became quiet enough, we all read scriptures and said our bedtime prayer, and then I made my critical error: opening the package of toothbrushes to let Natalie and Jack choose theirs, since of course they wanted new ones too. For some reason this angered Stockton to such a degree that he took the four toothbrushes and their package into the kitchen and spent the next ten minutes doing as much damage to them as he could. (I found one in the garbage disposal, and another bent in half, but two are still missing. The package was in shreds.) I heard everything but kept my distance, saying goodnight to Natalie and Jack and assuring them we could get new toothbrushes on Monday. 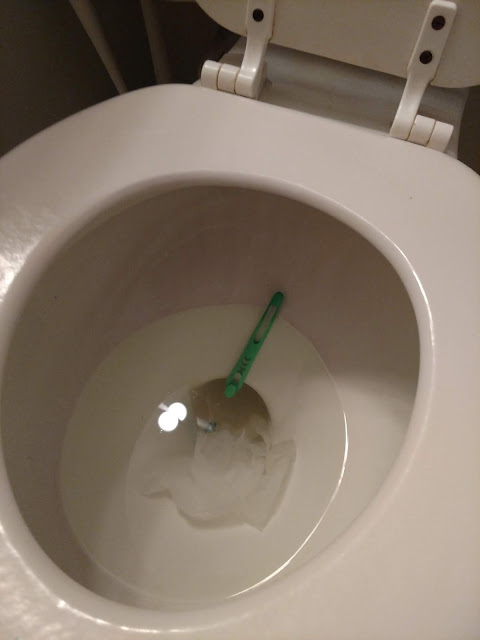 Stockton finally tired of the toothbrush rampage, turning his wrath instead to the innocent Christmas tree. He tried to rip off an offending ornament and accidentally pulled the whole tree to the floor, which scared him and then made him more mad, so he started not only taking all the ornaments off but also pulling the little gold tops/strings from their tops so that they couldn't be rehung. I sat watching all of this, listening to the calm music I had put on earlier, just letting Stockton do what he needed to do to get through his freak out and trying to maintain some dignity as my 5-year-old destroyed the Christmas tree. 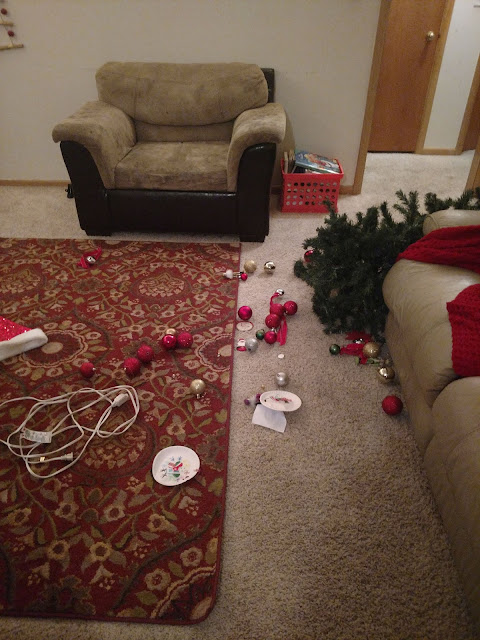 After making sure all the ornaments were taken care of, he finally eased up settled down on the couch. When he was ready, he let me take him by the hand to go to the bathroom and then coax him into his bed. He took his star lights into bed with him and asked for milk and his school bus, and then asked for a snack. I got him everything he needed, dealt with some Natalie/Jack interruptions, and then collapsed on the couch, exhausted.


We know he has autism, but to us that's just "Stockton," and most of the time I think we manage pretty well. Then we have nights like this, and I start to wonder if we're doing things right, or what life will be like for him, us, and the people around him as he grows up, and then all of the inadequacies that are normal for parents to feel suddenly triple for me as I try to navigate this extra unknown territory that comes with having a child that isn't "normal." Will he always stay home with Pop-Pop while Mimi takes the other kids to a movie? Will he want to be baptized when he's 8? Will he ever try new foods or play on a sports team or not get mad when someone sings Happy Birthday? What emotions will Natalie and Jack feel as they realize more and more that their brother isn't quite the same as them? How will people treat him at school as social differences become more pronounced?

I don't usually think about these things because I'm proud of Stockton and love his little (or not so little) quirks, and I don't think it's worth worrying about stuff that we can't control, but once in a while in these moments where I'm stripped down to my deepest heartaches I do become burdened with his uncertain future.

However, Stockton is doing SO WELL at school. Just so well. He loves his teachers, talks about his friends, and is still exceeding expectations for all the academic/social goals that we've set for him with his team. He loves riding the bus home, goes right into school in the mornings, and tells us about his day. We are so grateful for his perfect preschool teacher, Miss Kaycee, and for all of the adults who work with him and help him and his classmates be successful.

I like to remind myself of how far Stockton has come when I get anxious about how far he still has to go. When he was 2 he didn't even call us "Mom" and "Dad," or point or use words or maintain eye contact or really respond to his name. He didn't play functionally or socially, preferring to go off by himself with an item that spins or opens/closes.

Three years later he uses full, interesting, varied sentences, can write his name, tell stories, ask for what he wants, label emotions, refer to past and future events, and show empathy. He tells jokes and knows when he's being funny, and he especially loves laughing with his siblings. He connects with extended family members, makes up silly songs, and isn't as easily fixated on stimulating activities (repetitive behaviors, etc). He is wonderful and affectionate and intentional in his actions; he tells us he loves us and enjoys neck scratchies and cozies before bed. He is happy in the little things, and I watch him play or laugh or just sit on the couch looking out the window and I practically burst because my heart can hardly take how much love I have for this precious boy that has been entrusted to us. We feel keenly the privilege of raising him in a loving home, and know our family wouldn't be complete without him in it. 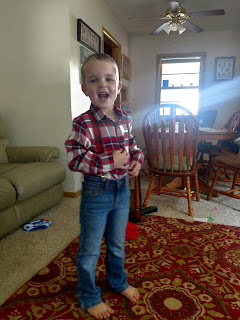 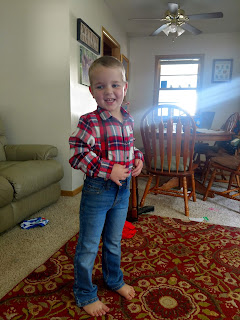 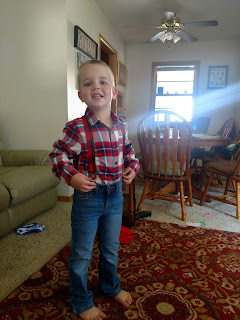 So, at the end of a day like this, I go in and kiss his forehead and give him as big of a hug as I can without waking him up, smoothing his favorite purple blankie and gently unfolding his fingers so I can put his toy away, feeling my love grow even fonder as he gives a little sigh and curls up closer to his blankets. 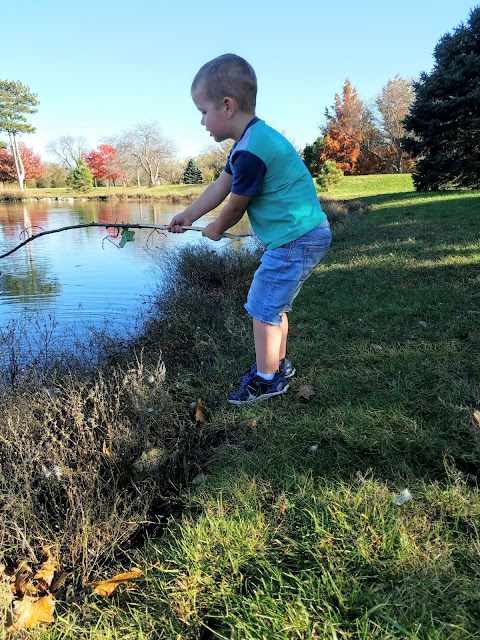 Posted by Jessie and Austin at 9:28 PM