Sometimes it's hard to decide if Stockton's behavior is related to having autism or related to being 5 years old. As his parents we've gotten pretty good at figuring it out, and it matters because it affects how we handle different situations. If he is mad about something and we think it's because he's 5 and he's trying to assert his independence, we try to reason our way through it and eventually put our foot down because we know that he can handle it. For example: not wanting to put shoes on to go outside. That's all 5-year-old...he's worn the shoes before, there is nothing wrong with them, it's winter so everyone wears shoes, and we will not leave the house until he puts his shoes on, even if he's freaking out about it.

If he is mad about something and we think it's because he has autism and his brain won't let him work around that issue in that way, we still try to have reasonable expectations about the situation but let him take the lead in working through it. There's a lot of negotiating, a lot of reassuring, a lot of waiting it out and taking baby steps, but there is no forcing him to do something that he doesn't want to do. For example: being mad about putting new sheets on his bed. He's upset because they are different than what he's used to and he doesn't like the change, so he rips them off and asks for his other sheets. I explain that they are in the laundry and they aren't fresh but that the new sheets are fresh and ready, and try to put them on again, which immediately elicits a freak out response. So I remind him to stay calm and then drop it, since the sheets don't absolutely have to be on the bed right that instant. But I keep the sheets nearby so that he knows they aren't gone and gradually move them closer to the bed. Later I casually say, "wow, your bed looks like it needs some sheets so we can be cozy, should we put these on?" and see how he responds...when this happened yesterday he was ready at this point to use the sheets, but sometimes in this kind of situation it takes many more tries over a period of days or even weeks before he's willing to use something new. Example: new clothes. We put the next season or size of clothes in his drawers weeks in advance of when we expect them to be needed because for some reason Stockton hates new clothes. If we let him get used to seeing the new shirts in his drawer mixed in with his other shirts, randomly weeks later he will choose one of the new shirts when he's picking his outfit, or when we offer him the same pair of shorts that we've been offering for a month he will unpredictably, finally say okay. When that happens, we pretty much avoid eye contact or talking about it, because drawing too much attention to it can make him change his mind and get upset.

I wanted to write some of this down because I want to be able to look back and see what things were like when he was this young, and compare it to wherever we are in the future. I also want to give Austin and myself credit for learning how to help Stockton through issues that make him sensitive. We can read his body language and reactions to predict how or why he is feeling certain things about certain situations and then adjust our responses to best facilitate his ability to move past whatever is triggering him. We have learned how to be flexible, how to not overreact, when to try to reason with him and when that isn't helpful, when to be firm and when to let it go, and most importantly how to help him calm down and manage the situation in appropriate, functional ways instead of just losing it because he can't cope. 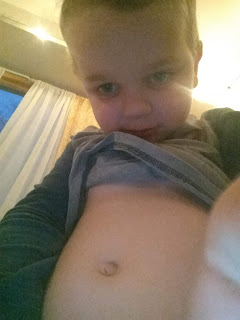 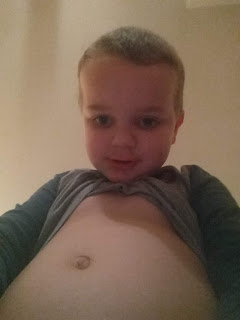 he loves selfies and belly buttons, so I had like 28 of these pictures on my phone one night


We're really proud of him - he is learning to regulate his emotions and control his responses and it's awesome to see. He knows how to take deep breaths, he tells himself (and us/others) that it's going to be okay, we can see him visibly slow down and try to explain how he's feeling or what he wants before he gets out of control, and he maintains the ability to listen to us despite turbulent emotional distress, whereas he used to just instantly freak out and not be able to regulate his emotions for the duration of a long tantrum. I'm making it sound like he's a little therapist or something - he still definitely has his outbursts, and most of them are irrational (or seem that way to our "normal" minds), but it's exciting and a relief both to us and to him, I'm sure, that he is learning coping mechanisms and self-control.

Sometimes going to school isn't a struggle and he has a great day.

Sometimes, purely out of stubbornness and independence, he decides he's going to be belligerent about getting ready for school or going down the stairs to the classroom door and we have a rough morning trying to pull him down from his stubbornness. (It's especially frustrating because once he gets into the classroom he's totally fine, happy to be there, no issue. It's like he just latches on to being mad about going to school for some reason but then once he's there he just forgets that he gave his mom a hard time for 45 minutes -_-) 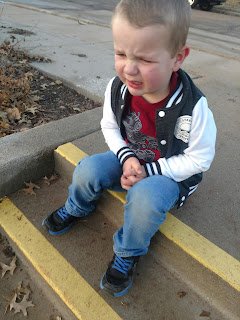 Sometimes I get a call in the middle of the morning because Stockton has to pee so bad that it's affecting his behavior. He absolutely, completely, positively REFUSES to go to the bathroom at school. It's not just school, it's any public place, but it's the biggest issue at school because that's where he spends more time than anywhere else outside of home.  Nothing we've tried has helped, and believe me....we've tried EVERYTHING. At the beginning of the year our biggest concern was getting him to be comfortable, calm, and compliant, so when he had to pee super bad I would come pick him up, take him home to pee, and bring him back, just so we could maintain a positive feeling about school. After a few times of doing that, I decided that wasn't necessary anymore and I would just come be with him in the classroom until it was time to go home; he would hold it and just wait to pee til we got home. Then after a while that felt pointless, like why am I coming to just stand here and ask you to go pee and have you say no and then just wait til the school day is over?, so a couple weeks ago I decided to come when his teacher called and just stay long enough that he was forced to pee at school instead of letting him come home.

I got to school around 10:30 that day and it was already clear that he really, really had to go, but he denied all requests to go to the bathroom and tried to act normal even though he was wiggling in his seat and holding his crotch the whole time. At 11:15 when everyone was cleaning up lunch and getting ready to go, it finally got so bad that he couldn't be still anymore, and couldn't even stand up straight. At that point I steered him over to the bathroom that is in the classroom, which he didn't like, but he had to go so bad that he couldn't effectively protest. I stood by the bathroom door and he wiggled on the floor nearby, violently shaking his legs and gripping his crotch and whimpering. It got so desperate looking that I picked him up and put him next to the toilet, then blocked his way out so he was forced to stay there. He took up vigil kicking his legs on the ground, crying and sweating because he had been holding it so long, and I kid you not we did this for the next NINETY MINUTES. I literally stood/crouched/sat in the preschool bathroom for an hour and a half watching my son writhing in discomfort next to the toilet because he would absolutely not go to the bathroom.

(AM preschool was long over but the PM preschool came in during this episode and the teachers, bless their hearts, watched over Jack and had him be part of their class while I was tied up with Stockton. More on how much I love this school later.)

Finally, FINALLY, after literal hours of coaxing and reassuring but mostly just standing nearby offering the comfort of presence and letting him work through it on his own, he finally agreed to pee and successfully peed in the toilet. I swear it felt like I had just won the gold medal in every event in the Olympics, but since it was Stockton I had to refrain from overdoing the praise because he doesn't like the hoopla.

(I wrote all of that at the beginning of February and now it's the end of May and I just realized I never finished this post! I'm sure I meant to have more stories/memories with these remaining pictures but for the sake of catching up I will keep it more brief) 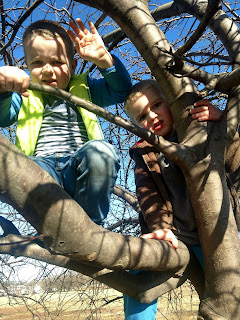 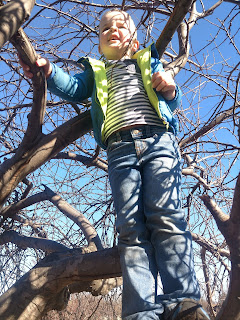 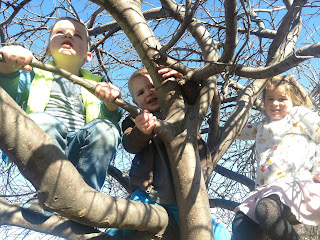 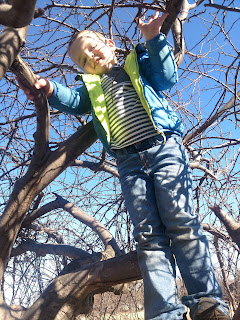 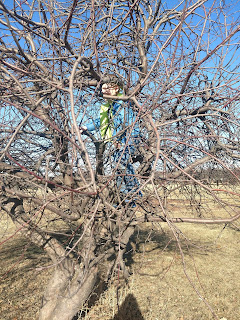 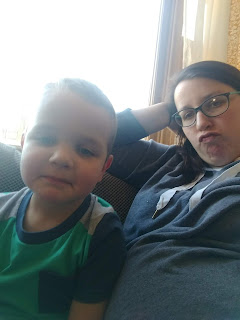 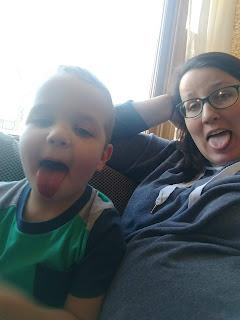 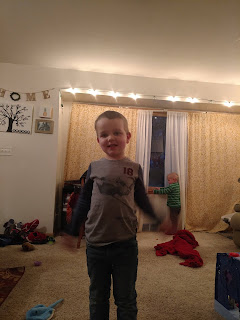 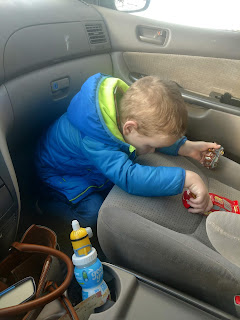 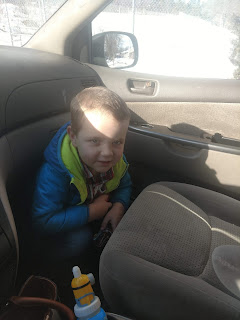 He loves to come sit up front with me when we're waiting to pick Natalie up after school. That car was his prize for peeing at school. 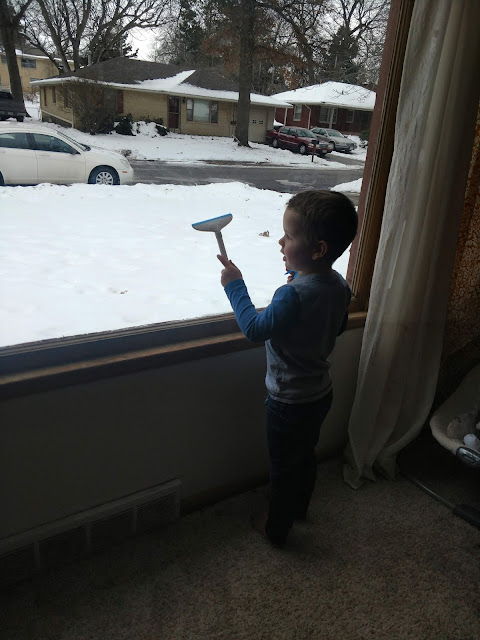 He watched the movie Paddington 2 at Grandma and Grandpa's house once and totally glommed on to it...there's a scene where Paddington is washing windows with a squeegee like this one and he was so happy to pretend to be Paddington like this.
Posted by Jessie and Austin at 8:25 PM